The Court’s conservatives fixated upon their belief that same-sex marriages are a very new institution. “Every definition [of marriage] I looked up prior to about a dozen years ago,” Chief Justice John Roberts claimed, limited marriages to opposite-sex couples. Advocates for equality, Roberts continued, are “seeking to change what the institution is.”

Meanwhile, Justice Samuel Alito argued that even “ancient Greece,” a society he perceived as welcoming to same-sex relationships, did not permit same-sex marriage. Justice Antonin Scalia insisted that “for millennia, not a single society” supported marriage equality.

Every injustice of the past must be perpetuated forever and ever, amen.

Those dang lazy webcomic artists see this conversation as an easy steal. This is dead on: 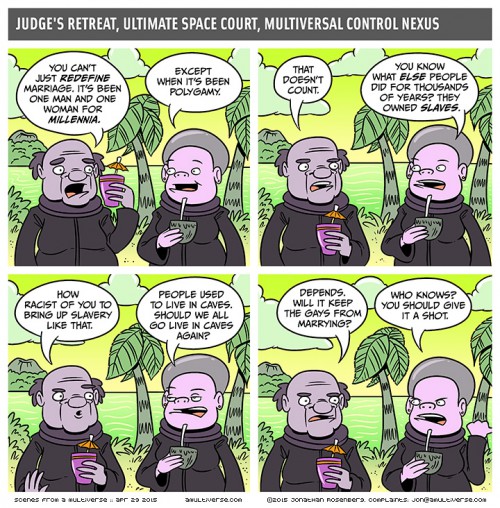 By the way, Judge Ruth Bader Ginsburg has a wonderful counterargument that takes a different tack: the meaning of marriage has changed over time, and one person is no longer chattel within the arrangement.

[Same-sex couples] wouldn’t be asking for this relief if the law of marriage was what it was a millennium ago. I mean, it wasn’t possible. Same-sex unions would not have opted into the pattern of marriage, which was a relationship, a dominant and a subordinate relationship. Yes, it was marriage between a man and a woman, but the man decided where the couple would be domiciled; it was her obligation to follow him.

There was a change in the institution of marriage to make it egalitarian when it wasn’t egalitarian. And same-sex unions wouldn’t — wouldn’t fit into what marriage was once.

It’s a good point, but a dangerous one: the australopithecines on the court, like Roberts & Scalia & Alito, might decide that’s a good reason to revert the marriage contract to one of ownership of the female side.

Once again, though, the Notorious RBG demonstrates why she’s my favorite Supreme Court judge.