Dan Graur has snarled at the authors of a paper defending ENCODE. How could I then resist? I read the offending paper, and I have to say something that will weaken my own reputation as a snarling attack dog myself: it does make a few good points. But it’s mostly using some valid criticisms to defend an indefensible position.

In its last round of publications in September 2012, the Encyclopedia Of DNA Elements (ENCODE) assigned a biochemical function to most of the human genome, which was taken up by the media as meaning the end of ‘Junk DNA’. This provoked a heated reaction from evolutionary biologists, who among other things claimed that ENCODE adopted a wrong and much too inclusive notion of function, making its dismissal of junk DNA merely rhetorical. We argue that this criticism rests on misunderstandings concerning the nature of the ENCODE project, the relevant notion of function and the claim that most of our genome is junk. We argue that evolutionary accounts of function presuppose functions as ‘causal roles’, and that selection is but a useful proxy for relevant functions, which might well be unsuitable to biomedical research. Taking a closer look at the discovery process in which ENCODE participates, we argue that ENCODE’s strategy of biochemical signatures successfully identified activities of DNA elements with an eye towards causal roles of interest to biomedical research. We argue that ENCODE’s controversial claim of functionality should be interpreted as saying that 80 % of the genome is engaging in relevant biochemical activities and is very likely to have a causal role in phenomena deemed relevant to biomedical research. Finally, we discuss ambiguities in the meaning of junk DNA and in one of the main arguments raised for its prevalence, and we evaluate the impact of ENCODE’s results on the claim that most of our genome is junk.

To simplify it further, they’re arguing that there are different definitions of “function”, and the criticisms of ENCODE rely greatly on the idea that evolution provides the best and most complete test of functionality, while ignoring biomedical functionality.

This is where I shock everyone: I can see that point and even agree with it. After all, if we’re arguing that traits with small effects on fitness are going to be invisible to selection, we have to recognize that there are genetic elements that do have some effect, positive or negative, on the individual, but that aren’t a consequence of selection. So there almost certainly are genetic elements that exist and are relevant to people’s health — they might even be very common — but were never shaped by the effects of selection on the population. An evolution test that identifies elements that have been subject to selection is always going to miss those elements that are invisible to selection.

However, the argument still fails for ENCODE. The authors argue that hypothetically, 80% of the genome has a “causal role in phenomena deemed relevant to biomedical research”. Having an allele that shaves ten years off my expected lifespan may be no big deal from the perspective of evolution, but hey, it matters a heck of a lot to me, so a research program that identified phenomena relevant to my health and well-being is something I would support, even if it didn’t involve evolution.

But did ENCODE do that?

I don’t think so, and the authors don’t point to any specifics. Postulating biomedical causality imposes a whole new set of requirements on the testing, and “a protein sticks to this sequence some times in some cells” is such a loose criterion that it doesn’t help us recognize biomedical relevance, either.

They quote this bit from ENCODE:

The mission of the Encyclopedia of DNA Elements (ENCODE) Project is to enable the scientific and medical communities to interpret the human genome sequence and apply it to understand human biology and improve health.

Likewise, in the introduction of the 2012 round of papers the authors explicitly frame their enterprise as providing “an important resource for the study of human biology and disease” (ENCODE Consortium 2012, p. 57). This is particularly important because what is relevant to contemporary medicine is not necessarily evolutionarily relevant.

I’ve already said I agree with that in principle. However, it’s just moving the goalposts to yet another position in which ENCODE fails to score. Where, in ENCODE’s assessment of the ‘function’ of sequences, was there an assay to test its effect on human health or biology?

Showing that a segment of DNA binds a protein is at least as far from showing a health effect as it is from showing evolutionary significance. The authors are simply floundering about, waving their hands, admitting that ENCODE failed to meet the functional criteria of evolutionary biologists, but maybe it meets the functional criteria of some other discipline, like medicine. Yeah, that’s the ticket, they were helping doctors, or maybe veterinarians, or maybe transhumanists or bioweapons designers. They didn’t actually have any tests for utility in these other domains, but if we fish around enough, maybe we can find an excuse somewhere.

Don’t believe me? Here’s their diagram explaining the phenomenon. 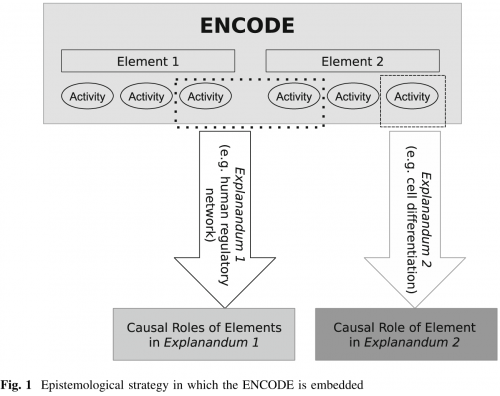 It doesn’t matter what biological activity we’re looking at, there is an ‘explanandum’ under which we can assign it a function. (Philosophers: I’m a bit confused here. Isn’t an ‘explanandum’ the thing that needs to be explained, and an ‘explanans’ the explanation for it, so the terms are a bit off? My pretentious Latin is a bit rusty.)

So even if it’s an unknown explanation, even if the experiment wasn’t designed to test it, even if the generated data doesn’t help solve any of the problems we’re using as a justification, ENCODE’s ass is still covered. How convenient!

Must he keep proving how awful he is? » « It’s money vs. principles