Every time I hear these stories, I’m horrified: parents who are so besotted with their dumb-ass religion, that they watch and pray and do nothing more as their children die of easily treated diseases. Type I diabetes symptoms go away with a shot of insulin; appendicitis can be quickly treated with a simple surgery; food poisoning leads to vomiting leads to a ruptured esophagus leads to painful death; childhood cancers are not so easily treatable, but dying slowly of blossoming tumors strangling your organs, without even so much as palliative care, is a misery. But the parents watch, and are no doubt suffering themselves, but the suffering of their children is less important to them than doubting the power of their nonexistent god to cure them. Strangely, never in the history of the world has a god magically intervened to make a cancer disappear, or an acute infection to vanish, or diabetes to simply go away.

So here’s a heart-rending and familiar story of ignorant faith healers betraying their own children, in the name of God.

The investigation led to the Peaceful Valley Cemetery outside of Boise, where Tilkin made the startling discovery that among the 553 marked graves at the cemetery, 144 appeared to be those of children, more than 25 percent.

Martin says a more extensive review of burial records at Peaceful Valley using the Idaho State Archives, obituaries and interviews with family and next of kin shows that among the 604 people buried at the cemetery, including unmarked graves, 208 are children, nearly 35 percent. Those findings are documented on the Find a Grave website, an online database of cemetery records. While the graves of deceased children in the cemetery date back to 1905, 149 children, more than 70 percent, were buried there in or after 1972, the year that Idaho enacted a law providing a religious defense to manslaughter.

You read that right. Idaho has a law allowing you to let your children die of neglect, if you have a religious reason to do so. They contrast Idaho with Oregon, which has removed the religious loophole — Oregon prosecutes parents who abuse their children with loving neglect. And that’s the least that ought to be done.

Now, though, look at your state. 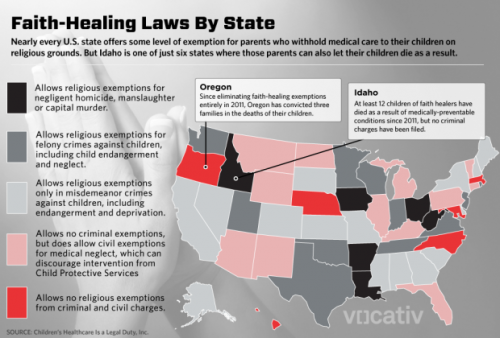 The redder the state, the better; the black states, which include Idaho, Iowa, and Ohio, allow religious exemptions for negligent homicide, manslaughter, or capital murder. Jephthah would have been right at home in those states…killing your child is OK if you do it to please God.

I notice that Minnesota, like Utah and Texas, has a religious exemption for felony crimes against children. That’s not right. We should be following the example of Oregon.

In 2011, the state eliminated all remaining religious exemptions for denying medical care. Within a few months, Followers of Christ members Timothy and Rebecca Wyland were convicted of criminal mistreatment for allowing a growth the size of a baseball on their infant daughter’s face to go untreated. They were sentenced to 90 days in jail and eventually lost custody of their daughter. While six states have now struck all religious protections for crimes against children, Oregon’s reforms have shown to be the most sweeping in their transformation. With the Rossiters’ conviction, the state has now won every faith-healing child death case it has prosecuted.

Advocates like Martin believe that without publicity and stiff legal repercussions, children will continue to suffer and die at the hands of faith-healing parents in Idaho. And they are praying that they will find a way to make the issue resonate with lawmakers and the public in the state.

A specular conundrum » « Later this morning in America