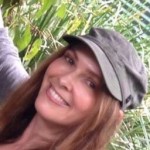 Reminder! You can still donate to the Stollznow legal defense fund!

Cosmos upstaged! » « Do you have to shove your awful little holy book in everything?