As my cohort gradually ages into that part of the population called “the old farts”, it’s good to know that that doesn’t require turning into an old bigot. Chad may have been disowned by his mother for being gay, but at least his grandfather stood up for him. 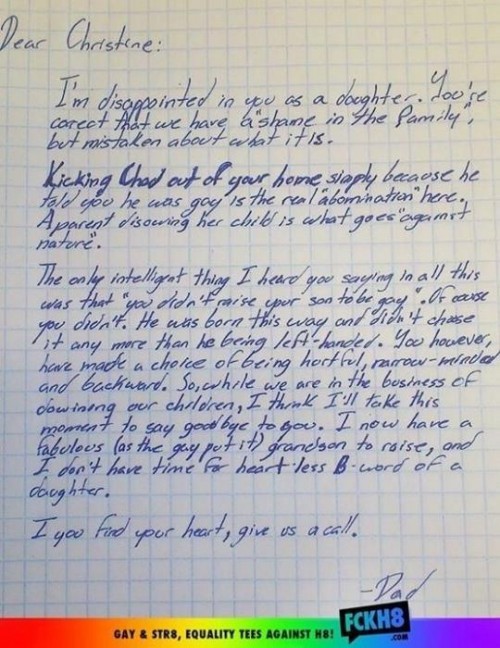 Dear Christine: I’m disappointed in you as a daughter. You’re correct that we have a “shame in the family,” but mistaken about what it is.

Kicking Chad out of your home simply because he told you he was gay is the real “abomination” here. A parent disowning her child is what goes “against nature.”

The only intelligent thing I heard you saying in all this was that “you didn’t raise your son to be gay”. Of course you didn’t. He was born this way and didn’t chase it any more than he being left-handed. You however, have made a choice of being hurtful, narrow-minded and backward. So, while we are in the business of disowning our children, I think I’ll take this moment to say goodbye to you. I now have a fabulous (as the gays put it) grandson to raise, and I don’t have time for heart-less B-word of a daughter.

If you find your heart, give us a call

Now I’m just waiting on word that I don’t have to become a WalMart greeter when I turn 65, and I’ll be free to age gracefully.