Don’t you hate it when you get up in the morning and the first thing you read on the internet is the news that your entire career has been a waste of time, your whole field of study has collapsed, and you’re going to have to rethink your entire future? Happens to me all the time. But then, I read the creationist news, so I’ve become desensitized to the whole idea of intellectual catastrophes.

Today’s fresh demolition of the whole of evolutionary theory comes via Christian News, which reports on a paper in the journal Molecular Biology and Evolution which challenges the ape to human evolutionary theory. Wait, that’s a journal I read regularly. What did I miss?

Fresh findings in the field of genetics have directly challenged yet another key evolutionary hypothesis by showing that the differences between humans and apes cannot be easily accounted for under the theory of evolution.

A recent 12-page journal article, written by three scientists in Spain and published in Molecular Biology and Evolution, details the results of careful analysis of human and chimpanzee DNA. After comparing and contrasting thousands of orthologous genes from humans and chimps, the scientists found their final data to be very much at odds with evolutionary theory. [Oh, reeeally?] In fact, they even titled their article “Recombination Rates and Genomic Shuffling in Human and Chimpanzee—A New Twist in the Chromosomal Speciation Theory.”

I knocked over my bowl of oatmeal in my haste to track down this “groundbreaking genetic discovery,” and got the paper downloaded and read while I sipped my morning tea. Hey, it’s from Aurora Ruiz-Herrera‘s lab — I know her work. Good stuff. Nice to know she’s going to be winning the Nobel prize for toppling evolutionary theory, even if it means I’m going to have to find something new to study.

But there’s a little contradiction here. The creationist account continues:

Why are these findings seen as a “new twist” to the evolutionary theory? In short, because many scientists have claimed that genetic differences between humans and apes can be attributed to a process known as “genetic recombination,” [They do? News to me.] which is a phenomenon that generates slight genetic variation via meiosis. However, this new journal article seriously calls this proposition into question.

In their research, the three Spanish scientists scrutinized differences between human and chimp genes, expecting to find higher genetic recombination rates in these areas of dissimilarity [Are you sure about that, Christian News?]. Even though studies of human-chimp similarities have been conducted in years past, this particular research was unprecedented because the scientists took advantage of new, high-resolution genome maps.

Ultimately, the study results were contradictory to what evolutionists had theorized [Really?]. Not only were genetic recombination rates markedly low in areas of human-chimp DNA differences (“rearranged” chromosomes), but the rates were much higher in areas of genetic similarity (“collinear” chromosomes) [Correct.]. This is the reverse of what evolutionists had predicted. [Uh, what?]

“The analysis of the most recent human and chimpanzee recombination maps inferred from genome-wide single-nucleotide polymorphism data,” the scientists explained, “revealed that the standardized recombination rate was significantly lower in rearranged than in collinear chromosomes.” [Yes.]

Jeffrey Tomkins, a Ph.D. geneticist with the Institute for Creation Research (ICR), told the Christian News Network that these results were “totally backwards” from what evolutionists had predicted, since genetic recombination is “not occurring where it’s supposed to” under current evolutionary theory. [Now, you see, this is where I lose all respect for you, Mr Tomkins.]

The problem here is that while the creationists got the main result right, they tried to wedge it into a bungled, fallacious version of evolutionary theory. Ruiz-Herrera has refuted creationist evolution all right, but not the real science that the rest of us study. In fact, it goes the other way and uses detailed genomic maps to confirm a hypothesis about evolution.

You didn’t expect anything else, did you? This is the way it always turns out. Creationist makes claim, creationist interpretation is bullshit.

Let’s look at what the paper actually says. But first, a little background.

There are a number of common genetic changes that affect rates of recombination — inversions and translocations. These changes can suppress recombination.

For example, look at this pair of complementary chromosomes. One of them carries an inversion: that is, the chunk of DNA that carries the e, ro, and ca genes is flipped around on one strand, so that the sequence e—ro—ca on the white strand reads ca—ro—e on the black strand. This is not a problem for the organism. It still carries two copies of each of the genes, as it should, they’re just arranged in different ways on the two chromosomes.

This rearrangement does not inhibit pairing during meiosis, either. As you can see in the bottom illustration, the two chromosomes have to get all twisty and kama-sutraey to line up all the genes, but they can do it just fine. So meiosis, the process by which the organism produces gametes like sperm and egg, can work out with no problem. So this is a rearrangement that doesn’t affect viability or fertility in any significant way. 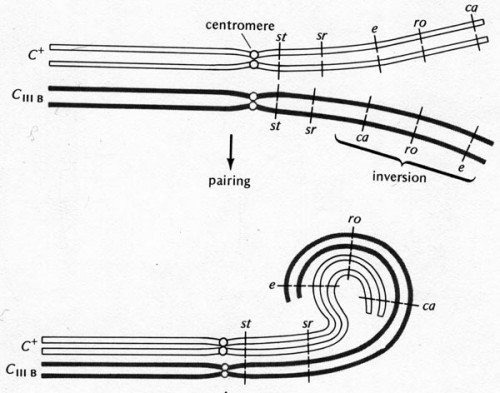 With one exception. What if there is a crossover event, that is, an exchange of DNA strands, within the inversion? It can get ugly. In the diagram below, there has been a crossover or recombination event between the ro and ca genes. Try tracing the effects on each DNA strand with your finger — you’ll see that some of the strands are going to be really messed up. 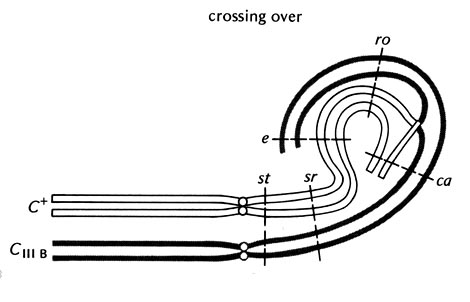 Or just look below. The four DNA strands that result from this process are separated to make it clear what happens.

A crossover event involves two strands of DNA out of the total of four, so you still get two uninvolved bystanders, the two noncrossover products. They’re fine and will lead to two normal, healthy gametes with a full genetic complement.

The crossover strands are totally screwed up. One is now dicentric, having two centromeres — when they’re separated at cell division, it will be like a little tug-of-war. This is a gross abnormality in the chromosomes, and will be read as a problem that leads to suppression of division and cell death. The other crossover chromosome is acentric, no centromere at all, as well as being severely truncated and lacking most of the genes present on the chromosome. It will most likely be lost completely during cell division, leading to a genetic deficiency. 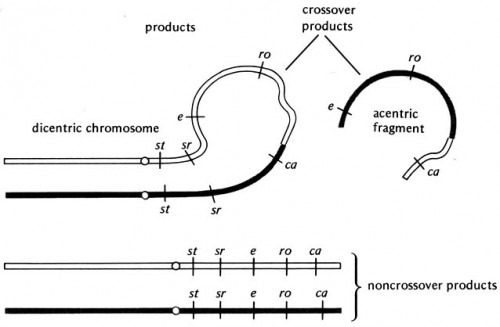 The net result of all this finagling is an apparent suppression of crossovers in the progeny. The alleles present at the e, ro, and ca genes on each chromosome are locked in to each other and aren’t easily reshuffled around.

That’s all basic genetics. What does evolutionary theory think about inversions?

They are mechanisms that could reduce gene flow between two populations, one that carries the inversion and another that doesn’t. It’s a process that could contribute to genetic isolation between those populations, and could therefore be part of speciation.

I’m not making this up, and I’m not relying on esoteric knowledge to know this: the paper states it clearly in the opening paragraph!

More recently, a number of related studies have proposed an alternative explanation by which chromosomal rearrangements could reduce gene ﬂow and potentially contribute to speciation by the suppression of recombination (Noor et al. 2001; Rieseberg 2001). According to this “suppressed recombination” model, chromosome rearrangements could have a minimal inﬂuence on ﬁtness, but would suppress recombination leading to the reduction of gene ﬂow across genomic regions and to the accumulation of incompatibilities.

That’s the part of evolutionary theory the scientists are addressing. It’s the idea that regions of DNA that differ, that lead to the differences between two related species, might also be accompanied by genetic changes like inversions that reduced gene flow between the founding populations. It’s a component of the speciation process that allowed novel polymorphisms to accumulate in one group without spreading to the other group.

Let me try to make this even simpler. The prediction of this hypothesis is that regions of DNA that contribute significantly to the differences between two species ought to also show higher frequencies of chromosomal rearrangements and lower frequencies of recombination. Master that one sentence and you’ll have the gist of this part of evolutionary theory.

So, in this paper, what did they find? They used high resolution genomic data to compare recombination rates in regions of the human and chimpanzee genome, predicting low recombination in those areas that are significantly different. Here’s the summary:

Overall, our data provide compelling evidence for the existence of low recombination rates within genomic regions that have been rearranged in the chromosomal evolution of human and chimpanzee.

Allow me to repeat what creationist geneticist Jeffrey Tomkins said.

Jeffrey Tomkins, a Ph.D. geneticist with the Institute for Creation Research (ICR), told the Christian News Network that these results were “totally backwards” from what evolutionists had predicted, since genetic recombination is “not occurring where it’s supposed to” under current evolutionary theory.

Huh. Did he not read that paragraph I quoted from the introduction, that clearly stated the expectation of evolutionary theory, and that the results fit that expectation?

Perhaps he skipped over the introduction, knowing it all already. So did he miss this statement in the results?

That’s the flip side: collinear regions between chimp and human chromosomes retain a conserved arrangement, and have a higher recombination rate.

So he didn’t read or understand the introduction or the results. Did he comprehend this statement from the discussion?

Using this approach, we provide evidences of a reduction of recombination within genomic regions that have been implicated in the chromosomal evolution between human and chimpanzee.

I daresay Mr Tomkins failed to read the whole damned paper! Or stared at it with glazed eyes and struggled to find some imaginary objection he could use to distort it into a rejection of evolution.

I’m sorry to say that Dr Ruiz-Herrera will not be winning a Nobel prize for refuting evolution, but she has still made a useful and interesting contribution to the evidence for evolution.