Some people have considered the recent criticisms of the CEO of the Center for Inquiry to be a wholesale attack on the organization (well, “some people” meaning “freakin’ loons”). Nothing could be further from the truth. I’m a supporter; I think many of their causes are essential; I appreciate the work of many of the people there. Let’s not forget that the whole of the organization is not the brain of the CEO, whether it’s Paul Kurtz or Ron Lindsay, both of whom have also done good work. We have to trust in the quality of the group to overcome the flaws of the individual.

So I thought I might throw out an occasional post to let you know about a few of the commendable efforts of CFI — you know, try a little positive reinforcement in addition to my usual spiked bludgeon of criticism.

The Office of Public Policy (OPP) is the Washington, D.C. political arm of the Center for Inquiry. Our mandate is to advocate for public policy based on reason, science, and secular values. This includes lobbying at all levels of government — Congress, the Administration, and the international community, including the United Nations — to promote and defend separation of church and state, the role of scientific evidence and secular ethics in policymaking, and basic civil and human rights.

This is the unit that lobbies the government directly for secular causes — if there is something that pisses you off about public policy, this is an effective place to ask for assistance. The director of the OPP is Michael De Dora, who has been working his butt off to get things done. He’s also their representative to the UN.

He meets with the State Department on issues of international concern for secularists, and as we all know there have been a number of those lately, with atheists being persecuted in several countries. He lobbies to keep religion and politics out of science, and has fought against the corruption of our educational system.

He’s also stood up for women’s issues, opposing restrictions on emergency contraception and abortion. You can find a good summary of his position in his speech at the Unite Women rally.

If CFI had really felt it necessary to tap a high-ranking man to give an introduction at the Women in Secularism conference, it would have been a good choice to delegate it to De Dora, who has a solid record on women’s issues and would definitely have been politic enough to avoid throwing a few rhetorical grenades into the crowd. In the past I’ve said some rude things about a few remarks he made about creationism, but…he got better. I’ve met with him a few times, and I’m confident in his abilities in his job — and he’s one of a lot of faces at CFI who do great work.

So keep on criticizing where criticizing needs to be done — it’s how the organization gets better. But let’s not forget that CFI also does invaluable work on our behalf. 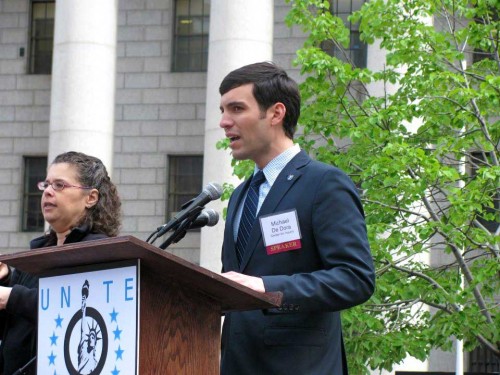 Zoooom! He’s off again! » « An opportunity to help