Go look at this Conspiracy Theory Flowchart. Look at it. 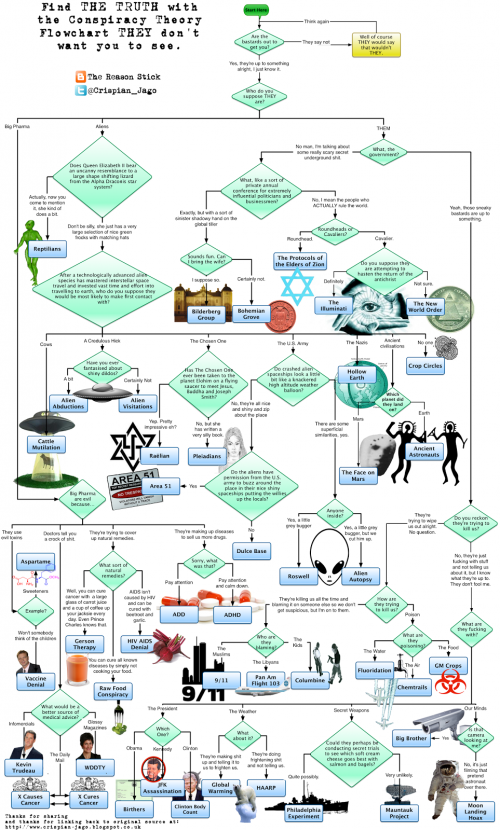 No, really look at it.

They got to you, didn’t they? The bastards have shaped your whole world, stuffed your head full of phony paradigms and bogus models and unsupportable conventions, and you can’t even see outside the goddamned box anymore. You’re in a straitjacket of their devising, your mind twisted and warped to fit a pre-pattern of which you are completely unaware.

Look again. Stare at it until you break through the walls of your own preconceptions. Break out of the box. Shred the box. DON’T LET THEM CONTROL YOU.

You need help? You’re like a pupa stuck in its chrysalis? You struggle but you can’t quite break free? Let me help you.

Look at the diagram. Follow the lines. Look at the decision points. Notice what they’re doing?

THEY’RE FORCING YOU TO FOLLOW THE LINES. Stop following the lines.

Look at it, man. It’s a fucking flow chart. It’s a tool of the establishment. It’s an expression of an archaic model of computer programming. (Yeah, programming. Like what they’re doing to your head.) It’s all linear and shit, all boolean and that dogma.

You think you’re afraid of the Illuminati, the Bilderbergers, the Reptoids, the Davos architects of your oppression? You should fear the Hungarian mastermind, the descendants of EDVAC, the universal binary and the tick, tick, tick of the clock, everything all sequential and latched and the single line of flow. They’ve split your world into data and code. They’ve marshaled your code into channeled pathways, they tell you which way to go, they LIMIT YOUR FREEDOM.

Look, man, here’s the secret. We’re not living in von Neumann’s world. It’s MASSIVELY PARALLEL, the switches are all fuzzy, your answers aren’t limited to the truth, any choice can be made and all will be made, and there’s NOTHING TO STOP YOU FROM COLORING OUTSIDE THE LINES. It’s all true. While you’re meandering down one path, putting one foot in front of the other, never deviating, History is hopping and skipping and dancing, dancing like a cokehead with his clothes on fire and a great big dildo shorting out in his ass, SLASHING across all those lines like they aren’t there, making great prigogenic leaps from premise to conclusion without regard for the blinkered “logic” of the diagram.

Break the chains The Man has wrapped around your brain and skitter to the REALITY, dude. It’s over there, not over here, and you aren’t going to get there as long as Johnny is calling the tune. Capisce?