It’s a frog tadpole with an eye surgically grafted to its trunk! 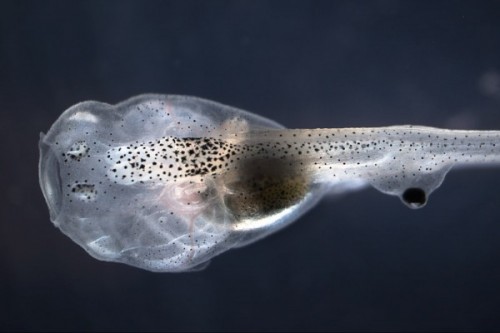 Wait, this is an old story — similar experiments were done at least 20 years ago. You can transplant developing eyes to the tadpole, but the cool thing is that the donor optic nerves will grow into the sensory tracts of the dorsal spinal cord and grow anteriorly to the optic tectum, where they will make functional connections. Not, as I recall, adequate for image formation, but at least good enough that the tadpole will startle if a light is flashed at the eye in its tail.

I did kind of go “ugh” at the spin the story put on it, though: that it could lead to a medical breakthrough that would allow blind people to see! Nope. Frogs already readily accept eye grafts and regrow the connections; there are lots of experiments where, for instance, you cut out the adult frog eye, severing the optic nerve, and reinsert it upside down, and the nerves grow back and build new, functional connections. That’s the hard part, getting operational regrowth. Planting ectopic eyes is trivial.

The Ice Age in the Bible » « Boston terror