Well, actually, it is getting rather gray. But I was just out on my daily walk on this very cold Minnesota day, and in addition the the usual coating of rime that accumulates on my face, I took off one of my gloves for just a minute to snap this picture. 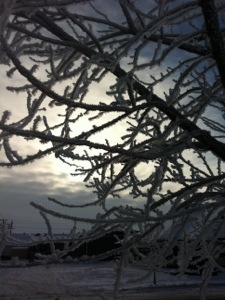 Really, it was just a quick exposure of bare skin to the cold…and my hand is still burning. Ouch. I think the swiftness of the transition contributed, but you know what? Cold weather can be really dangerous.

I’m warming up in the coffeeshop for a bit, and then I’m bundling up again and heading out. Don’t worry, it’s broad daylight, along well-trafficked roads, and it’s a short hike, but still — y’all be careful out there.