I’ve had my head in the sand for the last week, so pardon me for arriving late to the recriminations following the violence in Newtown, Connecticut last week. Like everyone, I’m wondering why it happened, and looking for answers: unfortunately, the only people providing answers of absolute certainty are the deranged reactionaries of the far right, who are lining up at the media microphone to babble their rationales. Most seem to involve a neglectful god who is teaching us a lesson.

James Dobson: We elected the wrong presidetn and allow abortion, so: “I am going to give you my honest opinion: I think we have turned our back on the Scripture and on God Almighty and I think he has allowed judgment to fall upon us.”

William J. Murray: “Without the authority of God, there are no morals, and none are taught in the public schools today. The ethics that are taught are situational, perhaps the same situational ethics that led to the logic that caused the tragic shootings in Newtown.”

Gary DeMar: “The problem is, our current culture – through the educational system – is telling young people that they are animals, in some cases, less than animals. So genetically we are no different (really) from a worm, a bug, or a dandelion.”

Mike Huckabee: “We ask why there is violence in our schools, but we have systematically removed God from our schools. Should we be so surprised that schools would become a place of carnage?”

Bryan Fischer: “I think God would say to us, ‘Hey, I’d be glad to protect your children, but you’ve got to invite me back into your world first. I’m not gonna go where I’m not wanted; I am a gentleman.'”

On the less ardently god-walloping side of the right wing, though, they’re offering secular solutions. Mad, dangerous, unworkable solutions.

Louie Gohmert: “I wish to God she [the principal] had had an m-4 in her office, locked up so when she heard gunfire, she pulls it out … and takes him out and takes his head off before he can kill those precious kids”

Ann Coulter: Only one policy has ever been shown to deter mass murder: concealed-carry laws.”

Megan McArdle: “I’d also like us to encourage people to gang rush shooters, rather than following their instincts to hide; if we drilled it into young people that the correct thing to do is for everyone to instantly run at the guy with the gun, these sorts of mass shootings would be less deadly, because even a guy with a very powerful weapon can be brought down by 8-12 unarmed bodies piling on him at once. “

Those are all awful and ridiculous ideas. But the very worst is this anonymous poem making the rounds of facebook. WARNING: dangerous levels of treacle and stupidity! Have a vomit bag handy!

Wait. This is so bad, I better put it below the fold, just to be safe.

twas’ 11 days before Christmas, around 9:38
when 20 beautiful children stormed through heaven’s gate.
their smiles were contagious, their laughter filled the air.
they could hardly believe all the beauty they saw there.
they were filled with such joy, they didn’t know what to say.
they remembered nothing of what had happened earlier that day.
“where are we?” asked a little girl, as quiet as a mouse.
“this is heaven.” declared a small boy. “we’re spending Christmas at God’s house.”
when what to their wondering eyes did appear,
but Jesus, their savior, the children gathered near.
He looked at them and smiled, and they smiled just the same.
then He opened His arms and He called them by name.
and in that moment was joy, that only heaven can bring
those children all flew into the arms of their King
and as they lingered in the warmth of His embrace,
one small girl turned and looked at Jesus’ face.
and as if He could read all the questions she had
He gently whispered to her, “I’ll take care of mom and dad.”
then He looked down on earth, the world far below
He saw all of the hurt, the sorrow, and woe
then He closed His eyes and He outstretched His hand,
“Let My power and presence re-enter this land!”
“may this country be delivered from the hands of fools”
“I’m taking back my nation. I’m taking back my schools!”
then He and the children stood up without a sound.
“come now my children, let me show you around.”
excitement filled the space, some skipped and some ran.
all displaying enthusiasm that only a small child can.
and i heard Him proclaim as He walked out of sight,
“in the midst of this darkness, I AM STILL THE LIGHT.”

Keeping your gorge down? Brace yourself for the final indignity: it was illustrated. 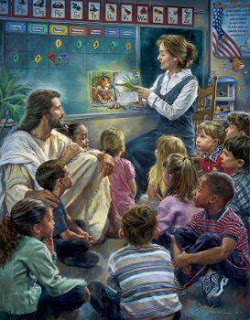 But wait. I lied. That wasn’t the worse. This is the worst, and I expect my opinion to generate loads of furious criticism in the comments.

The first minute and a half is pretty much indistinguishable from that poem above: scripture, eternal glory, not what is seen, but what is unseen, which is eternal, an eternal house in heaven, then a long middle section which has some reasonably good and noble words, and then it concludes on more god talk, more heaveny promises, god bless, blah blah blah. I’ve seen nothing but praise for that speech (well, except for the people complaining that he interrupted a football game), but I thought it was terrible. If I were an atheist parent of a murdered child, I’d consider it a slap in the face…and it was all unneccesary for it’s general message of consolation.

I was also offended at it’s platitudinous lack of rational suggestions for preventing this from happening again: it’s all prayers and change…vague, meaningless change.

How about this: this is a problem amenable to skeptical, logical analysis. We just have to recognize that the rest of the civilized world isn’t experiencing these violent outbreaks of singular violence with anything near the frequency of the United States. And when we look at these other countries, they’re more secular than ours, so let’s scratch the god issue off the list of causes. They’re also not arming everyone, so let’s kiss that one goodbye. And no, I don’t know of any that have classes in grade school to train kids to launch themselves in waves of suicide charges, so that’s not the answer, either.

Isn’t it obvious and simple? Regulate the guns, take away the unnecessary excess armament, quit glorifying violence, and stop treating manliness and gun culture as complementary.

Change. Anyone have any confidence that Obama will make any substantial changes?