I know this fact hasn’t escaped most of the regulars here, but I just thought I’d note it formally.

1) PZ posts a remembrance of the 14 women killed and 10 injured by the misogynistic murderer responsible for the École Polytechnique massacre that took place 23 years ago today, and points out that the hatred that motivated the murderer is still all too common.

2) 12 comments in, the thread becomes about whether the particular rhetorical trope PZ used to point out the continued existence of misogyny was fair to misogynists, and is no longer about remembering the massacre victims.

There was a briefly popular bon mot that went around a few months back along the lines of “Every online discussion of feminism proves the necessity of feminism.”  Add this to the pile.

In June I put together a hastily designed infographic and posted it to Facebook, where it has since gotten redistributed. It’s about the best, concisest way I can think of to convey how I feel about people one thread over complaining that PZ is being MEEEEEEN. 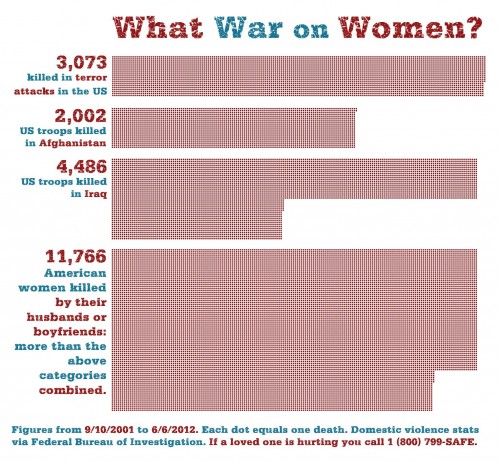 It’s worth noting that when I first posted it in June I spent the next couple days arguing with people quibbling — not over the facts represented, but whether I was trying to imply that being a woman in a relationship with a man was more dangerous than being a soldier. Or similar diversionary arguments. (No one objected to the design, which I sure as hell wish I’d thought through more clearly. But it’s escaped into the wild now, so oh well.)

Odd are that every one of those 11,766 women murdered — and of course that number has grown since June — was killed by someone who heard, and incorporated, anti-woman talk pretty much identical to the crap whose expression is being defended one thread down as “not the same as killing women.”

Yeah, you’re right: hate speech against individual women based on their gender isn’t the same as being a mass murderer. But it feeds those who commit the murders. And when you post online, or shoot the misogynistic shit in a bar, or complain “all in fun” among friends, they are listening to you, and deciding that you’ve got their backs.

And when you essentially march into a memorial service to complain about that fact, you’re saying the victims aren’t as important as your right to deny the consequences of your actions.