Steven Austin, the creationist geologist, gave a presentation at the Geological Society of America this November. I’m not a geologist, so I’m not competent to judge the geological details, but you can download a pdf of the presentation, and it definitely is a weird thing. Most of it is about an examination of features in the geology around Jerusalem that are indicative of an earthquake; I’ll accept that as a given, and assume that sure, there were a few earthquakes in the Middle East in the first century AD, and that they left traces that a geologist can read.

And that’s where it gets strange. This is a scientific talk presented at the GSA (I presume — it’s 40 slides long, which is at least an hour talk, and most of the slides are light on information — it looks more like a popular talk than the data-dense kind of stuff I usually see at scientific meetings), and a substantial subset of the slides are Bible quotes. Like this one: 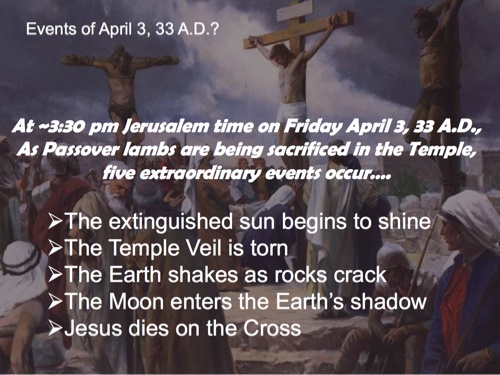 I’d get up and walk out of a talk that was that shallow and irrelevant. And then there are a few suspicious remarks. Throughout the talk, the slides are very specific about the earthquake traces being from 33AD, and they even mention April of 33AD. Yet in the abstract, note the highlighted bit: the accuracy of the date is ±5 years, and the official measurement is 31AD…which Austin blithely revises upwards by two years by citing “history”, by which he means the untrustworthy religious account found in his bible.

Two thousand years ago the Dead Sea Basin was shaken by two earthquakes that left two widespread seismites within laminated Dead Sea sediment. The first earthquake (spring 31 B.C., Jericho fault, M~7.2) transformed adjacent Dead Sea laminated mud and aragonite into a persistent and distinctive intraclast breccia seismite in places greater than 1 m thick. The 1st- century Jewish historian Josephus described the 31 B.C. earthquake as a significant social and economic event during King Herod’s reign. A second seismite occurs within laminated mud and aragonite at 10 to 85 cm above the 31 B.C. seismite. Varve counting above the 31 B.C. datum indicates the second seismite can be assigned to 31 A.D. (+/- 5 years), but history specifies as 33 A.D. Superb mud laminae exposures are provided in two gullies at the southwest corner of the Dead Sea at Wadi Ze’elim fan delta where the 33 A.D. seismite outcrops 55 to 85 cm above the 31 B.C. intraclast breccia. The 33 A.D. seismite at Ze’elim is intraformationally folded, 8-cm-thick, sometimes brecciated, silicate mud and aragonite/gypsum laminae. Seismite facies progress from “linear waves” to “asymmetric billows” to “breccia” expressing transition to Kelvin-Helmholtz turbulence within the uppermost shearing laminae during shaking. Recumbent folds and imbricate faults are consistent with gravity collapse upon a broad arch structure during shaking. Folded seismite transitions northward within fan deltas to thicker intraclast breccia, suggesting an epicenter nearer Jerusalem. Matthew, the 1st-century synoptic Gospel author, reported two earthquakes in Jerusalem in 33 A.D. These are the Jerusalem earthquakes of April 3 at the crucifixion of Christ (Matt. 27:51), and April 5 at the resurrection of Christ (Matt. 28:2). Luke, a first century physician and historian, reported a smaller earthquake in the summer at the gathered assembly (Acts 4:31). The persistent 33 A.D. seismite indicates the biggest 33 A.D. earthquake was M~6.0. This biggest earthquake was likely April 3, 33 A.D. that startled city residents and caused moderate damage, especially to the western side of Temple Mount. Pivots of two, 20-m- high, metal doors of the Temple appear to have been damaged, and the 20-m-high curtain in front of the doors was torn, likely by displacement of the lintel of the Temple during the earthquake.

So, I’m just curious and throw a few questions out to the geologically informed audience here.

And a totally flippant question: it seems like every year after the GSA meetings I get email about crackpot talks. How much of this weird stuff is actually going on? I suspect it’s buried in an avalanche of good science, but you never know…maybe someday it’ll be as entertaining as a meeting of ghost hunters and UFO fanatics. (No, not really, I’m joking, geologists! Don’t hit me with those wicked pointy hammers you all carry around!)

Friday Cephalopod: Self portrait » « A metaobservation on misogyny