Researchers have taken a photo of a DNA strand, which is kind of cool, but also confused me a bit. Here it is: 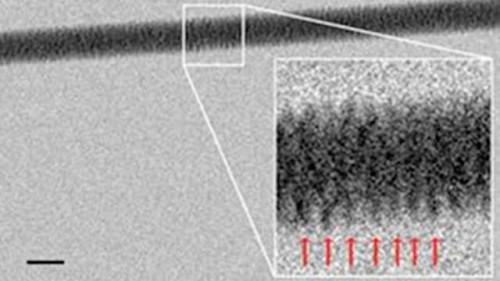 Wait. The link says that this photo reveals the familiar “spiralling corkscrew” of the DNA double helix, but that can’t be right. The familiar B-DNA form has a diameter of 2nm and the helices ought to show a 3.3nm repeat — this photo shows something way too thick and far too tightly wound to be a single strand. Also, every source I’ve found so far reproduces the photo with the scale bar but doesn’t tell us the size of that bar, which is really annoying.

I looked a little further elsewhere (I don’t have access to the journal it was published in, unfortunately) and found a slightly different story:

…at present, the method only works with “cords” of DNA made up of six molecules wrapped around an seventh acting as a core. That’s because the electron energies are high enough to break up a single DNA molecule.

Oops, yeah. That makes more sense. So sorry, you still haven’t seen a photograph of a single double-helical strand of DNA. But at least now you’ve seen many strands of DNA wrapped around a filament.

Here’s a much more detailed critique of the reporting on that paper.

I had poutine and lived to tell about it » « Oh gob, evo psych again?