Free movies on the UMM campus, open to all! 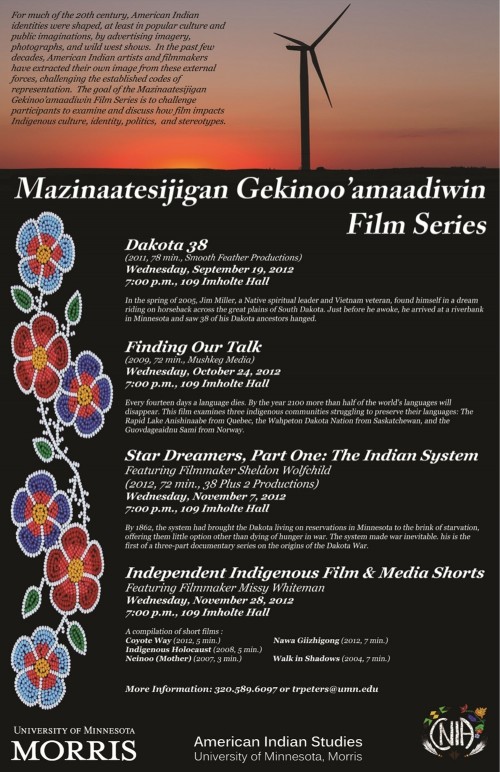 Watch out for the woo, but you’ve got to appreciate the fact that oppressed peoples are expressing themselves in their own words about their lives and the destruction that has been wreaked on them.

Mazinaatesijigan Gekinoo’amaadiwin Film Series (Films with Knowledge)
For much of the 20th century, American Indian identities were shaped, at least in popular culture and public imaginations, by advertising imagery, photographs, and wild west shows. In the past few decades, American Indian artists and filmmakers have extracted their own image from these external forces, challenging the established codes of representation. The goal of the Mazinaatesijigan Gekinoo’amaadiwin Film Series is to challenge participants to examine and discuss how film impacts Indigenous culture, identity, politics, and stereotypes.

Dakota 38 (2011, 78 min., Smooth Feather Productions)
Wednesday, September 19, 2012
7:00 p.m., 109 Imholte Hall
In the spring of 2005, Jim Miller, a Native spiritual leader and Vietnam veteran, found himself in a dream riding on horseback across the great plains of South Dakota. Just before he awoke, he arrived at a riverbank in Minnesota and saw 38 of his Dakota ancestors hanged.

Finding Our Talk (2009, 72 min., Mushkeg Media)
Wednesday, October 24, 2012
7:00 p.m., 109 Imholte Hall
Every fourteen days a language dies. By the year 2100 more than half of the world’s languages will
disappear. This film examines three indigenous communities struggling to preserve their languages: The Rapid Lake Anishinaabe from Quebec, the Wahpeton Dakota Nation from Saskatchewan, and the
Guovdageaidnu Sami from Norway.

Star Dreamers, Part One: The Indian System, Featuring Filmmaker Sheldon Wolfchild (2012, 72 min., 38 Plus 2 Productions)
Wednesday, November 7, 2012
7:00 p.m., 109 Imholte Hall
By 1862, the system had brought the Dakota living on reservations in Minnesota to the brink of starvation, offering them little option other than dying of hunger in war. The system made war inevitable. his is the first of a three-part documentary series on the origins of the Dakota War.