If you kidnap one child, there’s an APB and a massive police response and if you’re caught, you’ll be spending a good long while in jail. If you kidnap a million children over decades, you’re a source of morality and goodness. So think big! 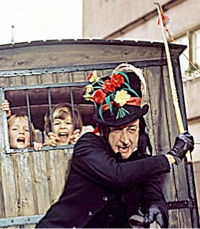 In some cases, mothers in Australia were drugged and forced to sign papers relinquishing custody. In others, women were told their children had died. Single mothers also did not have access to the financial support given to widows or abandoned wives, and many were told by doctors, nurses, and social workers that they were unfit to raise a child. Siewert says, “We heard practices that were either illegal or unethical and downright cruel.”

“It wouldn’t surprise me to hear the same thing happened elsewhere,” continues Siewert, “…the U.K., the U.S., Canada and Ireland. So you could, I think, expect that those countries also had these sorts of practices.”

I suspect you can guess who’s behind such contemptible acts: it’s the Catholic Church, of course, arbiter of morality, who have long held that a woman has no autonomy at all and must be supported by a good strong manly man…so single mothers are obviously unfit to care for a child.

Ironically, Bill Donohue has issued a press release whining about how the Reason Rally singled out Catholicism for venom (it didn’t). He takes vindication in our contempt for his religion.

Catholics take note: The fact that the atheists always attack us more than any other religious group is a backhanded compliment. They know who the real enemy of hate is, and who they must defeat. They don’t have a prayer.

Sorry, Bill. The record is clear. Your church is not an enemy of hate at all; it’s a sinkhole of depravity and oppression. The church is attacked because it’s a monstrous institution. And if it is attacked more than other religions, it’s only because it commits more crimes than others.