Good news! The gorilla genome sequence was published in Nature last week, and adds to our body of knowledge about primate evolution. Here’s the abstract:

Gorillas are humans’ closest living relatives after chimpanzees, and are of comparable importance for the study of human origins and evolution. Here we present the assembly and analysis of a genome sequence for the western lowland gorilla, and compare the whole genomes of all extant great ape genera. We propose a synthesis of genetic and fossil evidence consistent with placing the human–chimpanzee and human–chimpanzee–gorilla speciation events at approximately 6 and 10 million years ago. In 30% of the genome, gorilla is closer to human or chimpanzee than the latter are to each other; this is rarer around coding genes, indicating pervasive selection throughout great ape evolution, and has functional consequences in gene expression. A comparison of protein coding genes reveals approximately 500 genes showing accelerated evolution on each of the gorilla, human and chimpanzee lineages, and evidence for parallel acceleration, particularly of genes involved in hearing. We also compare the western and eastern gorilla species, estimating an average sequence divergence time 1.75 million years ago, but with evidence for more recent genetic exchange and a population bottleneck in the eastern species. The use of the genome sequence in these and future analyses will promote a deeper understanding of great ape biology and evolution.

I’ve highlighted one phrase in that abstract because, surprise surprise, creationists read the paper and that was the only thing they saw, and in either dumb incomprehension or malicious distortion, took an article titled “Insights into hominid evolution from the gorilla genome sequence” and twisted it into a bumbling mess of lies titled “Gorilla Genome Is Bad News for Evolution”. They treat a phenomenon called Incomplete Lineage Sorting (ILS) as an obstacle to evolution rather than an expected outcome.

This problem is related to a biological paradigm called independent lineage sorting. To illustrate this concept among humans and primates, some segments of human DNA seem more related to gorilla DNA than chimpanzee DNA, and vice versa. This well-established fact produces different evolutionary trees for humans with various primates, depending on the DNA sequence being analyzed.

In a significant number of cases, evolutionary trees based on DNA sequences show that humans are more closely related to gorillas or orangutans than chimpanzees—again, all depending on which DNA fragment is used for the analysis. The overall outcome is that no clear path of common ancestry between humans and various primates exists, so no coherent model of primate evolution can be achieved.

The recent release of the gorilla genome spectacularly highlights this evolutionary quandary. According to the Nature study, “in 30% of the genome, gorilla is closer to human or chimpanzee than the latter are to each other.”

When you compare the genomic sequences of three related species, such as the human, chimp, and gorilla, you’ll typically find from an average that a pattern of relatedness is revealed: humans and chimps are closer to each other than they are to gorillas, indicating a more recent divergence between humans and chimps than between humans and gorillas. However, that’s an average result: if you compare them base by base, you’ll find genes and regions of the chromosomes in which the gorilla sequence is more similar to the human sequence than to the chimpanzee sequence; if you looked at only that gene, you’d conclude that humans and gorillas were closer cousins, and chimpanzees were more distant.

Is ILS a problem? It complicates the analysis of sequences for sure (although it also can be used as a probe to look at evolution). But it’s not a problem that calls evolution into question; to the contrary, it’s an expected phenomenon.

Here’s why. This diagram illustrates the simplistic, naïve expectation you might have. 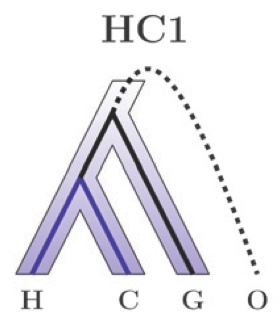 The outline of the tree illustrates the average pattern of sequence similarity, with the conclusion that humans (H) and chimpanzees (C) diverged more recently than humans/chimps and gorillas (G), which diverged more recently than humans/chimps/gorillas and orangutans (O). The solid line inside the outline illustrates the history of a single gene, drawn in black to represent the ancestral state, and then drawn in blue at the time humans and chimps diverged.

This is a gene that acquired its unique differences in the two lineages at the time of the human-chimpanzee split. It fits perfectly with the average pattern.

But just ask yourself: how likely is that? There are tens of thousands of genes in each of these species. Do you really think all the differences popped into existence simultaneously, at one instant when two populations of our last common ancestor discretely and completely separated? Of course not: you’d have to be a creationist to believe in something that stupid.

Here’s another possibility. Speciation wasn’t instantaneous, but a matter of multiple populations existing in parallel, with changes in genes appearing in different subsets at different times, spread out over long periods of time. So sometimes a mutation unique to one extant lineage appeared long before the split, and was just sorted at the time of separation into one lineage or the other. 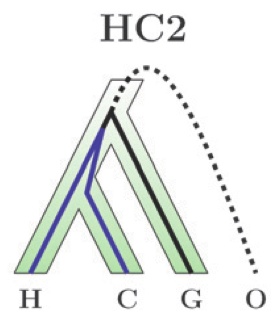 In this case, comparison of the gene in question would give the same qualitative answer — humans and chimps are most closely related — but a different quantitative difference in the time of divergence. But as you can see, it requires nothing weird or unexplainable or contradictory to evolutionary theory: you just have to appreciate the population nature of evolution.

We can go further: different forms of the genes can be sorted into different lineages entirely by chance. 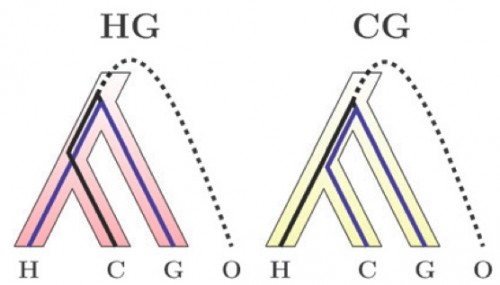 In these cases, we have two different forms of a gene that arose in ancestral population, ancestral to humans, chimps, and gorillas. By drift, one form was lost in the gorilla lineage, but both forms continue to be found in the ancestral manpanzee population; at the time of human/chimp divergence, these gene forms were sorted into different lineages. By chance, these will show either a closer relationship between humans and gorillas or chimpanzees and gorillas.

And the likelihood of HC2, HG, and CG above are equally probable!

So the creationist argument against evolution on the basis of incomplete lineage sorting is very, very silly. The only way you would fail to see ILS is if every genetic difference between two species emerged simultaneously, in lockstep, in one grand swoop. That is, the observation of ILS contradicts creationism, not evolution.

The authors of the Nature paper were well aware of this, and even illustrated it in their first figure. 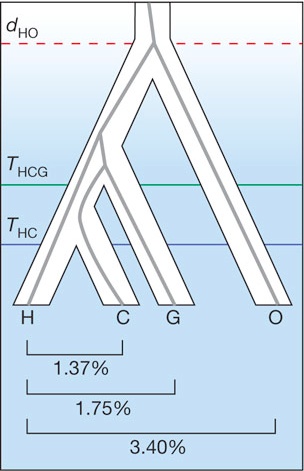 Phylogeny of the great ape family, showing the speciation of human (H), chimpanzee (C), gorilla (G) and orang-utan (O). Horizontal lines indicate speciation times within the hominine subfamily and the sequence divergence time between human and orang-utan. Interior grey lines illustrate an example of incomplete lineage sorting at a particular genetic locus—in this case (((C, G), H), O) rather than (((H, C), G), O). Below are mean nucleotide divergences between human and the other great apes from the EPO alignment.

We can measure the average genetic distance between the species (the percentages at the bottom of the figure), but we can still see individual genes (the gray line) that branched at different points in their history. This is simply not a problem for evolutionary theory; once again, the creationists rely on their proponents having a foolishly cartoonish version of evolution in their heads in order to raise a false objection.

I get email » « Why I am an atheist – Chris Kwolek