Good god, media, I DON’T CARE ABOUT IOWA ANY MORE. It’s a freakish little local contest dominated by hardcore fanatics, and the only reason the results will mean anything is that the media will do its best to pump up the outcome into a portent of things to come. So when I saw this headline in the Minneapolis Star Tribune at the coffee shop today, I just set it aside, disgusted, disinterested, and disenchanted. 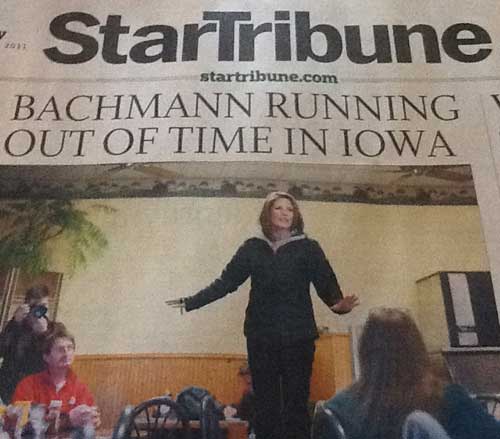 Bachmann isn’t going to win. Even if she did, she’s one lunatic among a field of demented dwarfs.

I’m ready to call for a return of party bosses in smoke-filled rooms; this obsession with turning politics into a horse race, with every news source fussing over percentage points, is making a joke of democracy.

The only “points” we should be discussing are the substance of their policies.