Now that Scotland has entered phase 1 of its re-opening, Tegan and I ventured out into the Glaswegian Wilds to meet up with comrades, not seen since before The Great Isolation. At the Grove of Kelvin did we meet, and sup among the daisy-strewn grass, on blankets spaced just over two meters apart. The pigeons cooed, the crows cawed, and I’m fairly certain I heard a raven or two croak.

On our return journey, we spotted a thrilling – yet terrifying – sight! A vicious feliform predator was prowling the wasteland outside his lair, accompanied by the poor souls who shared his home, left alive in exchange for their servitude. 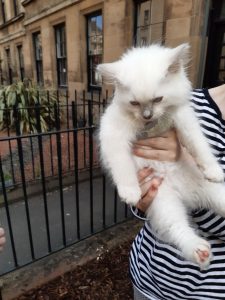 Like many of his kind, Banjo has trained his simian servants to raise him up, that he might survey the land. Scholars are uncertain whether they achieve this through learned body language, or some more sinister, psychic communication 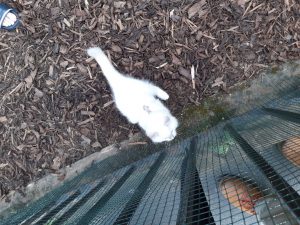 On the ground once more, Banjo comes to the border of his domain, intent on an inspection of the tip of my umbrella. Fearful of his ire, I allowed him to examine it at his leisure. 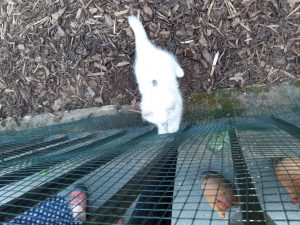 The mighty hunter pounced! His paws, both velvety-soft and frighteningly armed both hurtled toward the umbrella as it moved up the chicken wire. Truly, I survived only because of the merciful presence of that sturdy fence! 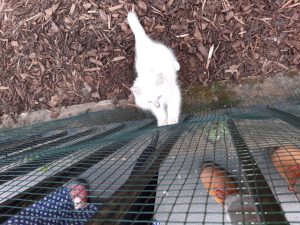 As the umbrella continued up the fence, unaffected by his first pounce, his piercing blue eyes followed it, waiting for the next opportunity to strike. 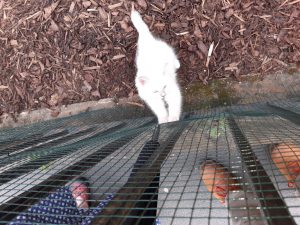 Foolishly, I shifted, and drew the gaze of the beast. he thought about eating my legs, but decided, instead, to continue patrolling his territory. I am certain that, had the poor souls sheltering in his lair not brought him offerings of food, I would not have survived to tell this tale.

After he tired of investigating my umbrella, he returned to practicing his hunting skills, the better to consume some future prey less fortunate than us. If you listen carefully, you can hear the terrified Glaswegians telling us of the tribulations of attempting to sleep with so mighty a predator moving about after the sun sets. They were using the bright pink thing in an attempt to tire him out, in a vague hope that he would sleep through the night, and allow them to do the same.

All in all, it was a lovely day, with lovely people, and it was nice to meet Banjo, and the folks who kindly gave me permission to share my encounter with you all.