“Corporal punishment” is not and has never been about punishment.  Its purpose is terrorism and intimidation, to subdue and subjugate people by demonstrating that those in power can perpetrate violence without accountability or redress.  The only reason someone or some entity (e.g. government, military, etc.) uses “corporal punishment” instead of “capital punishment” is that the victims live in fear and the abusers want them to obey. The dead no longer do either.

“Corporal punishment” isn’t just about hitting a child on the buttocks.  It’s torture and beatings in prison, it’s rape in all of its forms, it’s all forms of coercion through violence.  Take away the power of those being abused, and make sure they know there is no authority to appeal to and make the violence stop.  It’s as much mental torture as it is physical.

Here are a few sites with resources.  More below the fold.

April 30th is NO SPANK DAY! Before you stop reading this latest bit on not spanking, please consider that I agree with you that spanking works, just maybe not in the ways most parents intended.

Spanking works.  In the short term, true fact. Most of us will stop doing what we are doing if someone hits us. So, yes, in that regard, spanking works. But what about the long term? To better understand the effects of spanking we should consider the long term and short term effects of giving into a tantrum. When we yield to the screaming, flailing, tantrum throwing child in the grocery checkout line and give her the candy, it works. The screaming stops. The crying stops and the tantrum is over.  Until the next time. We all know, the more we give into tantrums, the more they reoccur. In the same way, when we spank our children, it does work, for the moment, but what doesn’t work about spanking is long term success. Spanking puts an end to the undesirable behavior, but only in the here and now. Children who stop the undesirable behavior when spanked outgrow this method of “discipline” in time and haven’t really learned how to control behavior as much as they have learned to avoid punishment.

Spanking: The Case Against It (Ages 1-3)

Should I spank my child?

The short answer is no. Some people feel hesitant to abandon a discipline they experienced when they were children. But the thinking on spanking has changed over the years, and now doctors and child advocacy groups advise against spanking, slapping, or any other kind of physical punishment.

When your child misbehaves or acts in defiant, inappropriate, or even dangerous ways, you want to show him his behavior is unacceptable and must change. Spanking may seem like a direct and effective way to do that, but it delivers other messages you don’t want to send:

But what’s the harm in a little smack?

Plenty. In a study released in July 2002, a psychologist who analyzed six decades of research on corporal punishment found that it puts children at risk for long-term harm that far outweighs the short-term benefit of on-the-spot obedience.

According to End Corporal Punishment .org, only 63 countries (as of 2022) have made all of this violence against children illegal, just as it is illegal to do to adults.  (Noticeable are the countries which are NOT on the list.  Of all the allegedly “progressive and democratic” English speaking countries, only New Zealand and Ireland have banned it.)  In over 130 countries, however, abusive “parents” can still beat children even though in many it’s illegal for schools or anyone outside the “family” to hit them.  Physical violence as “criminal punishment” is still legal in sixteen countries.

The primary reason violence against children is still rationalized is power.  Abuse of children through violence does not “teach them”, does not “correct them”.  It creates fear and violates trust.  What child could trust an abuser ever again?

Violence against children is a failure of the parent (or as demonstrated below, a failure of schools), not a failure of the child.  They have not learnt, asked or figured out how to get a child to cooperate without resorting to violence – or just as often, they “think” it’s okay to hit children because they themselves were hit.  It’s as much revenge against the innocent as lack of education.

I’ve been teaching for twenty years and never once felt inclined to hit a kid.  I can show displeasure without anger, or when angry able to do it without being threatening or intimidating (e.g. refuse to let them participate, force the student to leave the room, etc.).  Being consistent, honest, keeping promises, and being fair works, and it’s not hard.

What sucks about this is that because the kids know I’m not violent, they are more willing to be cooperative with me, and some look forward more to being with me than with their own families.  They know I’m never going to hit them, and I know they’re going to be violated when they get home if they didn’t get 100% on a test

Here are two revolting individuals, the first a lawyer that compares abusing a child to a cop “using reasonable force”.  When have you EVER heard of cops using “reasonable force”, especially when their victims weren’t white?  And another lawyer falsely inferring that Psychology Today supports the violent assault of children, that there is such a thing as “reasonable and moderate” in violating a child.

A blowhard “writing” for ScienceNews falsely asserts “the debate over spanking is short on science, high on emotion” and falsely claims science isn’t against this violence.  That drivel may be from 2014, but there were already known studies showing violence doesn’t work.  Why didn’t she read them?  Because they disagree with her point of view?

There are a plethora of other “experts” (allegedly qualified or self-appointed) who spew the “I turned out okay” nonsense, unable and unwilling to deal with the violence they were subjected to.  I know from experience that admitting you were abused is tough, but taking it out on defenceless people isn’t how you deal with it.

Second, the direct connection between “corporal punishment” and to lynching and slavery in the US.

Sailors. Corporal punishment is as old as the Hebrew Bible, and bare-handed spanking was used to discipline children by the 18th century. Other devices older than the paddle, such as the birch rod, have also been used to flog the buttocks. But people didn’t commonly paddle each other on land until the 19th century. In the 18th century paddling was used at sea to discipline naughty seafarers, such as if they slacked off and went to sleep during night watch.

Paddling came to American shores as a way to punish slaves without scarring them. Slave owners and slave traders began paddling because they didn’t want to damage the people they saw as their valuable property. As James Glass Bertram wrote in his 1869 History of the Rod, “In order not to mark the backs of the slaves, and thus deteriorate their value, in Virginia they substituted the pliant strap and the scientific paddle.” A more recent historian further explains that “a scarred slave was a troublesome one, and no one wanted to purchase trouble.” This didn’t make the paddle any less cruel. A Mrs. Mann of Missouri was known for her fearsome “six pound paddle,” which she wielded with both hands. Some slaves were given hundreds of strokes from the paddle, and were left near dead.

Injury without visible damage so the victims would be “saleable”.  Could they be any more monstrous?

(Of course, that sort of hidden violence continues today, women wearing sunglasses and long sleeves to cover up bruises and black eyes.)

Remember the image from the 2004 US presidential election showing which US states allowed or tolerated slavery, and which voted for George Bush?  NoSpank.net has a similar picture showing which US stated currently use the most violence against children, and which states perpetrated the most lynchings in the past.  Seven of the ten are the same on both lists, and the other three could easily be on the other list. 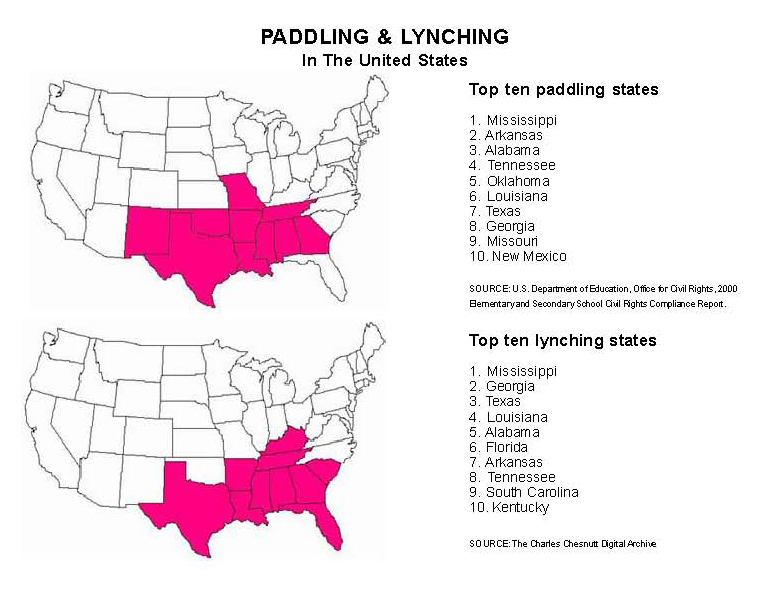 The most galling part about violence against children is that it mirrors cop violence: almost all the victims are Black while whites rarely face violence, and those using violent force are prodominantly white as well.

Why Are 19 States Still Allowing Corporal Punishment in Schools?

In 1977, the U.S. Supreme Court legitimized the use of corporal punishment in schools by deciding that the practice did not qualify as “cruel and unusual punishment.” Despite the ruling in Ingraham v. Wright, corporal punishment – the use of physical force (usually paddling) on a student intended to correct misbehavior – would soon decline rapidly across the country. Between 1974 and 1994, 25 states would ban the practice, recognizing that it was an ineffective and inappropriate school discipline measure.

Most alarming are the blaring racial disparities in how this punishment is meted out. Students of color, predominantly African American boys, are on the receiving end of a paddle significantly more often than their white counterparts.

From the Brookings Institute, January 2022:

Five years ago, I wrote the following passage right here on the Brown Center Chalkboard:

As we approach the annual celebration of Dr. King’s life, it is worth examining the difference in how our schools discipline Black and white children. In public schools in the United States, Black children are twice as likely as white children to be subject to corporal punishment.

Has there been progress over the last five years? In some ways, not so much. Black children are still twice as likely to be beaten in school compared to white children.

The fact that it is illegal for schools to perpetrate this violence against children doesn’t stop it from happening.  From The Guardian, May 2021:

‘It’s barbaric’: some US children getting hit at school despite bans

Students of color and those with disabilities are disproportionately subjected to corporal punishment, which continues despite widespread bans and evidence of harm

When a Florida elementary school principal was caught on video spanking a six-year-old girl with a wooden paddle last month, it sparked national outrage and a criminal investigation. But for those who believed the principal should face arrest, a state prosecutor’s memo stung like a slap to the face.

Florida is one of 19 states in the country that allows corporal punishment in schools, but it’s prohibited in Hendry county, where the little girl was beaten, and state law requires educators to follow local rules. That was not enough, however, for state prosecutors to hold Melissa Carter, the principal, responsible for any wrongdoing. In a three-page memo outlining their decision not to pursue charges, they instead questioned the credibility of the girl’s mother, an undocumented immigrant who filmed the campus incident and shared it with the local television station WINK. Officials concluded the mother consented to the beating and at no point spoke up to “raise any objection”.

That the prohibition in her own school district did not protect the Florida first-grader from being hit is just one example of how corporal punishment persists even in places where the practice is explicitly outlawed.

“Consent”?  WHEN?  She was probably afraid of the school calling ICE’s racist thugs to go after her if she spoke up.  Even if she did “consent”, the child did not.  Would they be making that argument if this were about a teacher or principal raping a student?

Oh right, it’s Florida.  They would.

It Follows » « Not Fit To Lead: Plumbing the deaths of depravity