Early Sunday morning (1:36AM, UTC+8), Taiwan had a 6.1 earthquake off the east coast, about 85km from the town of Ilan and 42km from the Japanese island of Yonaguni.  No damage or injuries were reported.

All cell phones sold in Taiwan contain an app which gives warnings of events like military drills and other things.  Last night, my phone rang three seconds before the earthquake hit, not exactly the most useful information unless you’re carrying a pane of glass or something.

Most times, the alarm only sounds once.  However due to a glitch, everyone’s phone was activated fourteen times in the span of five minutes.  If you have only one phone, as most people do, it’s no big deal. But for “Pokemon Go Grandpa”, it was a different story.

Mr. Chen, aka Pokemon Go Grandpa, is a 71 year old man who still plays the mobile game as apparently many still do.  Chen has accumulated 72 used smartphones and travels around Taipei trying to catch ’em all.  I’ve seen him a few times.  In January 2020, only 4G and 5G phones can make calls, 2G and 3G only available for emergencies.  Used 3G phones cost very little and are only useful for cameras, mobile games, or internet access, the way Chen uses them.

As I said at the top, every phone received fourteen earthquake alarms due to the glitch.  Chen has 72 phones.  Do the math.  It took him twenty minutes to turn them all off.  As it turns out, he was out playing the game when the earthquake happened so it’s not as if his or his wife’s sleep was disturbed.

A man who operates up to 72 phones at a time while playing Pokemon Go was the the most seriously affected victim of a glitch in Taiwan’s earthquake alert system, which caused 14 warnings to be sent in response to an earthquake at 1:36 am this morning, January 7.

People were awakened by the alarming audio warning only to find the warnings kept coming after the the 6.1 magnitude earthquake struck 85 kilometers off the coast of Yilan County, on Taiwan’s east coast.

Immediately following the alarms, traffic overloads occurred on the Internet. Popular bulletin board system PTT was unavailable, and it is believed that the problem occurred after people were woken up, and logged in to find out what was going on.

Many Internet users expressed concern about the possible effects the warnings could have had on Taiwan’s well-known “Pokemon Go Grandpa,” Chen San-yuan. At last count 71-year-old Chen had 64 smart phones, and commenters couldn’t imagine the din from so many alarms blaring at once.

Mr Chen held an impromptu press conference outside his home in Tucheng District, New Taipei City this morning and told the media that he now had a total of 72 phones. Chen was not asleep, but out and about playing Pokemon Go at the time of the earthquake. Chen said that he didn’t feel any shaking during the earthquake, but all his phones started blaring and vibrating at once.

Chen said that he had more than 60 phones on at the time, and that it took him until around 2:00 am to turn all the alarms off. 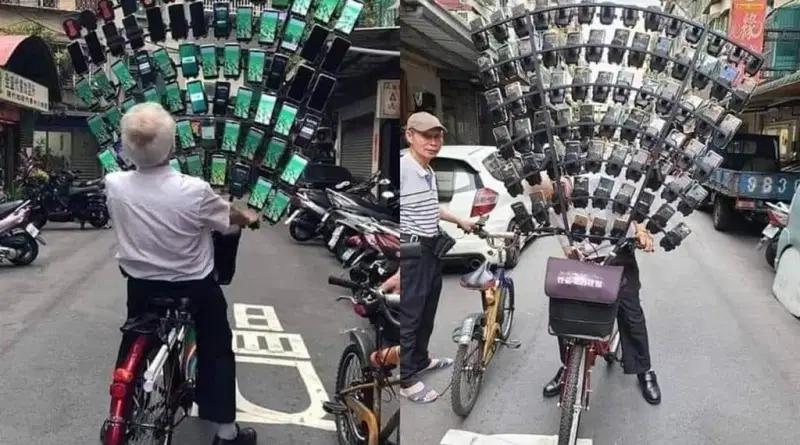 Archaeological Dig: And you thought historical revisionism only happened here » « The Cult Doesn’t Cancel: Not when it’s their own