As the title says, November 13-19 is Transgender Awareness Week.  And Friday November 20 is Transgender Day Of Remembrance, a grim day this year.  Life intruded (e.g. last Saturday’s pride parade in Taichung, among others) or I would have talked about this earlier.

To quote from GLAAD.org:

Each year between November 13 – 19, people and organizations around the country participate in Transgender Awareness Week to help raise the visibility about transgender people and address issues members of the community face.

The week before Transgender Day of Remembrance on November 20, people and organizations around the country participate in Transgender Awareness Week to help raise the visibility of transgender people and address issues members of the community face.

Transgender Day of Remembrance (TDOR), is an annual observance on November 20 that honors the memory of the transgender people whose lives were lost in acts of anti-transgender violence that year.

Read more about Transgender Awareness Week and the Transgender Day of Remembrance below, and find out how you can participate.

From Planned Parenthood of Illinois:

Transgender Awareness Week is a time for reflection, resilience, and action

This week is Transgender Awareness Week, a time to raise visibility about transgender people and address issues faced by members of the community. The week ends November 20, on Transgender Day of Remembrance and Resilience, a day to honor the memory of people murdered in acts of anti-transgender violence.

During this important week, we are reminded of a grim reality: despite some progress in recent years, many transgender people, especially Black and Latinx trans women, deal with discrimination and violence on a daily basis.

If you’re not already taking action, now is the time to start.

While there’s been noticeable progress in some areas in recent years, like the visibility of transgender people in popular culture, historic wins in the recent election, and improvements in health care, the transgender community still faces daily discrimination and violence from loved ones, our education systems, our workplaces, in social services and shelters, from law enforcement and medical professionals.

Artist Margot Durling an art piece called Chosen Family which is displayed in the Halifax Commons, of Halifax, Nova Scotia.

This week marks Transgender Awareness Week, and one Halifax artist hopes their piece inspires others to feel accepted.

Margot Durling is the trans and non-binary artist behind the new Chosen Family art piece standing tall at the Halifax Commons.

“There’s a history of genders beyond the binary,” Durling says.

They knew they weren’t female when they were very young.

“I’ve always been an artist so I drew a lot as a child and anatomically I was drawing myself as male very early on.” 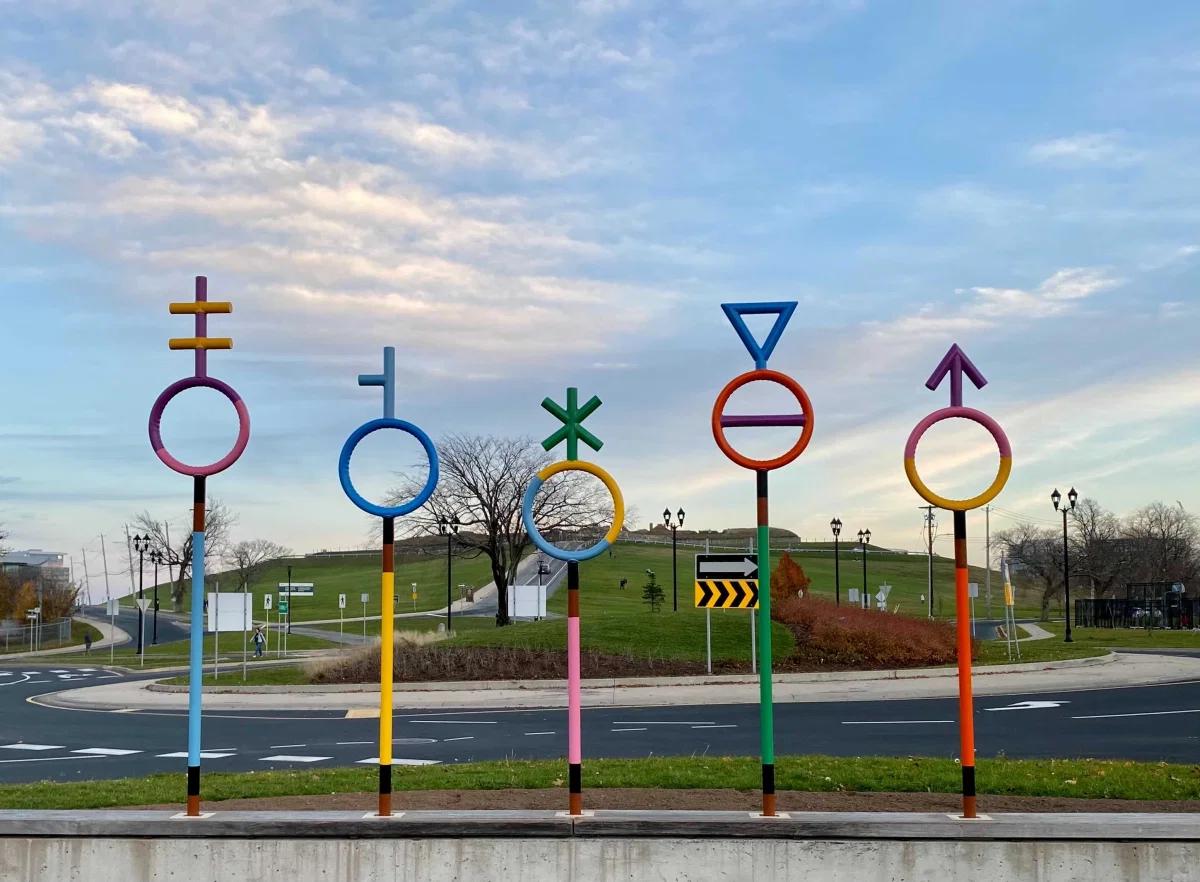 Awareness is necessary because just as Transgender and Non-Binary people have become more visible every year, so has hate, bigotry and violence.  It’s not just in backwards countries with undemocratic rightwing and fascist governments (e.g. Brazil, Poland, the US).  Even in allegedly “Trans friendly” countries with laws that are supposed to protect people, governments are turning a blind eye to discrmination.  Because they can without consequences, because those being hated have no political or social power.

These items are all within the past week, not counting thousands from the past year along.  From Pakistan:

Heera Malik was allegedly attacked and tortured by some unidentified man on October 3st1 night, near a traffic signal, in an area of sector F-11, Nayyab Ali told APP.

It has been more than a week to the incident and the concerned police station had not registered a First Information Report, shifting responsibility to other police station, she alleged.

Trans People at Risk in Honduras

William Alejandro Martínez, a trans man from Honduras, stood up for his rights when military police officers stopped him in Comayagüela in May 2019 and asked to see his identity card. They questioned him about his gender identity, physically assaulted him, and threatened to arrest him. “Don’t touch me, I’m a human rights defender,” Martínez insisted. That’s when an officer pointed a rifle at him, saying “I don’t give a damn what you are.” “My life passed before my eyes,” Martínez remembered.

By some counts, Honduras has one of the world’s highest rates of homicides of transgender people.

Ten years before Martínez stared into the barrel of a gun, Vicky Hernández, a trans woman, sex worker, and activist, was killed on the streets of San Pedro Sula. Last week, the Inter-American Court of Human Rights heard a case arguing that the Honduran government is responsible for Hernández’s loss of life.

And from New Zealand, where the government condoned it:

Woman evicted with 3 hours’ notice for being transgender

Kristine Ablinger was kicked out of her flat because she is trans. The Human Rights Commission says the homeowner acted within the law.

“Final Notice” was the subject line of the email sent to Kristine Ablinger just before 1 o’clock on a Monday afternoon.

It was from her flatmate who owned a three-bedroom house in Auckland’s Birkenhead. Kristine rented a small room with a little balcony and a sliver of a sea view. The room felt perfect: cosy and private. A space of Kristine’s own, where she would be safe when she began taking hormones.

It said she had 24 hours to move out.

Awareness is vital because ignorance breeds bigotry.  Those who know the least are the first to believe fictions, especially fictions that drive them to violence.  Fictions about “bathroom predators”, about “danger to women”, about “internalized misogyny”, about fake “science”.  And the only known violence is perpetrated by those who lie and claim that Transgender people are a “threat”.

From an item by organizational psychologist Nancy Doyle:

Trans Awareness Week: Liberating Our Thinking From The Rules That Bind Us

Researchers are tentatively reporting a higher prevalence of transgender identities in neurominorities than in neurotypicals. What does this mean for inclusion? For me, I think of the trans community as being at the edge of our boundaries, pushing our conceptualization of social norms in new, exciting directions.

Transgender and non-binary individuals advance the cause of gender equity, by really forcing us to examine the boxes we have put ourselves in, the limits we assign to each other by accident of birth and allow us to recalibrate “the rules” of gender. Similarly, the neurodiversity community have challenged to reconsider what we think of as “normal” in terms of thinking, learning, communicating and expression of ability. It is no surprise that these communities overlap, though I must note caution about correlation and causality–there is no evidence to suggest that one causes the other.

We have become happier to talk about transgender as our society has become more open-minded, and loosened the restrictions on what people are, and are not, allowed to be. Indeed, like the oft-cited “increase” in autism, I would argue that the “increase” in transgender and non-binary people coming out may simply represent a more accurate reflection of what has always been there. And therefore the same argument applies to trans as applied to neurodiversity: this is a normal variation in the human species, which enriches our world. And therefore, the same benefits apply, an opportunity to recalibrate what we think of as normal, and move into new ways of thinking and being.