Hong Kong protesters successfully made the puppet “leader” and mass murderers in Beijing back down from the proposed “extradition” law that would allow legalized kidnapping of people in Hong Kong (citizens and foreigners) and enable secret trials that violate human rights.  But the protesters didn’t back down or assume everything was finished.  They continued their protests to make it clear they wouldn’t stand for a second attempt later nor any other criminal “laws”.

The PRC fought back, first with corrupt police aggression in uniform, then with organized gangs of thugs in white shirts to violently assault the protesters.  Reportedly the gangs were both out-of-uniform police and triad gangs)

Hong Kong students in Taiwan and Taiwanese people are showing its support by organizing a helmet collection campaign. Motorcycle helmets, new or used, are being collected and will be shipped to Hong Kong to distribute to protesters. Many protesters suffered head injuries when the PRC’s jackbooted thugs attacked.  Helmets are not weapons, so this is clearly not an act of aggression, it is a response to one.

Here’s an amusing piece of art coming from Hong Kong: 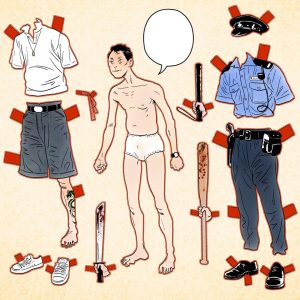 I don’t like quoting the linked site as a source” given the poor quality of the writing and the site owner’s open sexism and bigotry.

TAIPEI (Taiwan News) — As clashes between Hong Kong protesters and law enforcement officers continue to escalate, an initiative to donate helmets as a means of supporting the anti-extradition bill demonstrations has begun in Taiwan.

Hong Kong students based in Taipei organized two helmet donation events in the city last week, collecting nearly 200 new and second-hand helmets on Thursday (July 25), and 500 on Sunday (July 28). Known as the Hong Kong Outlanders, the group helped organize a number of solidarity protests in Taipei throughout June.

Hong Kong online news outlet Stand News has also reported the issue. Nearly 20 shops on Taobao, one of the biggest online shipping websites in China, have openly said they refuse to sell and deliver “sensitive” equipment to Hong Kong, including helmets, masks, and other protective gear, the report said. According to the report, this is in response to anti-government protesters vandalizing Beijing’s Liaison Office in Hong Kong on July 21.

The Hong Kong Outlanders have so far declined to reveal how they plan to send the collected helmets from Taiwan to Hong Kong, citing fear of interference. They said they would keep the public updated once the helmets arrive safely in Hong Kong.