Photography has made art obsolete.  Nobody can make a living as an artist these days.  We should really smash all cameras, for art.

You may have guessed, this is yet another post defending the use of AI art tools.  They are a revolutionary advance in art technology on par with the invention of photography.  How fortunate are we to bear witness to this remarkable creation?  How you’re acting in response to the advent of this tool is exactly the same as you would have reacted to the invention of photography.  Chew on that for a minute.

I’ll keep posting these things for as long as I keep seeing cold liquid shit takes from AI art opponents.  I know it’s a tall order for people like us who have the thoughtless confidence to post our opinions on the internet (unlike the more circumspect unspeaking hordes of lurkers out there), but maybe try to think before you opine.

Just one question not enough people are asking themselves, as in most areas of discourse:  How could I be wrong about this issue?  I have done that.  The more you actually know about this subject, the less any of the arguments against AI art hold up.  Elucidate a position that withstands educated scrutiny, or if you’re too lazy to get educated or scrutinize, just keep embarrassing yourself.

I find that annoying because most AI art opponents are on my side of the political aisle, so they’re embarrassing me while they’re at it.  (The original Luddites were on my side of the aisle as well, so fair enough.)  I like to think our blog network values skepticism and reason though.  Over time, perhaps it will.
– 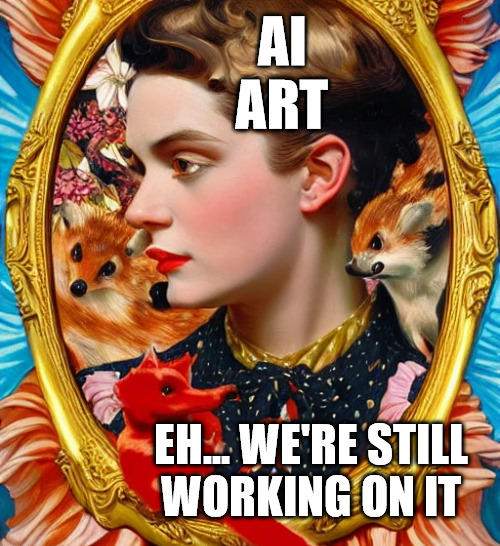 PS:  I’ll keep adding responses to other BS I see, just to keep from making my posts nothing but this topic.

I keep seeing artists whining about people trying to do AI art in their style.  You know you can’t actually copyright a style, right?  And that you’ve benefited from that yourselves?  And that this only differs from an artist directly imitating your style by the tool they use to do that imitation?  I agree it’s tasteless for AI kids to imitate living artists, but even with the best AI results ever, they can’t do what you can do, can they?  As an artist, are you nothing but a style?

PPS:  If I ever get around to making a more comprehensive article on this, and I might because I’m still rather steamed about it, do try to respond to what I’m actually saying before you come with the usual endlessly reiterated glurge.  You’re on my article, in my house.  Respond to me, or fuck entirely off.  I will do my best to make my points more clear, concise, and eloquent than usual.  If my argument still isn’t compelling enough to answer to, then there’s no point in talking to me with your usual three talking points gussied up into giant walls of text.

PPPS:  When I say all existing art jobs are fucked and not worth preserving, don’t take that as a “give up the ship, why bother with labor activism” nihilism.  Please.  Listen to me.  You can form a union and keep fighting over and over and over again for the same crumbs, at least in those jobs where there’s even an employer to organize against.  Or you can embrace real radicalism.

It’s hilarious to me the kind of out-of-touch socialist who dreams that I can form mutual aid within my ghetto cannot imagine a world in which there are different and better ways to make art happen than the ones people currently pursue.  Artistic mutual aid.  Art outside of capitalism is possible.  Or am I just a better radical where art is concerned than 99% of the internet?

PPPPS:  Storing a thought for future use.  The comparison to cameras is even more apt than I’d initially thought.  Cameras point at reality and the artist chooses what of that reality to use or discard for their composition.  You can use AI and just take the first result, the same way you can lazily snap a pic of anything.  Or you can do like a photographer and tease the inputs, curate the results.  Your art is whatever the final form takes, after your thought and and creativity is applied.  The chief difference is that with photography you take pics from the physical world, in AI you take pics from computer output.  Given the current, imperfect state of the tech, it’s like photography of a very surreal virtual reality.

Antisemitism and Phishing » « The Sext in the Collection