Flashing Light Warning on this video:  It doesn’t actually have flashing lights, but the jarring camera movement and hard cuts between scenes in chiaroscuro lighting might have the same effect.  Also the music is intentionally cruel to the ears, but artistic.

Andvaka is the Icelandic word for insomnia, which isn’t terribly meaningful in itself, but as Iceland gets a season of excessively long daylight, they probably feel it harder than we do.  Last night I got to sleep about 2:00 AM and woke up hard at 5:30.  Time to get ready for work rolled around at 9:20 and I was still awake, so I had to call off.  As I type this it’s 4:30 PM and I’m flagging badly, glad I had the luxury of a paid sick day so I’m not making potentially ruinous mistakes right now.

I had a night a little over a year ago that was similar.  I couldn’t sleep, and my mind kept turning paces.  At that time, I was going over what I’d say if I was being interviewed by Rachel Maddow, over and over and over again.  Last night, it was a little more varied and less grandiose, but I think it dipped into talk show interview territory for at least a bit.  This seems like textbook mania, for a bipolar person, and there’s every reason based on my immediate family to think I have some risk of that.  But it doesn’t happen often enough to be a major problem.  Still, fingers crossed it doesn’t get worse.

There is something else related to my family health history that was on my mind.  I’m mutated.  I’m a mutant.  Seems to be from my father, and possibly my brother has the same issues.  We all have arthritis and degenerative disc disease in our lumbar vertebrae.  Last week I found out I have a mutation that increases risk of certain cancers of the abdominal organs. 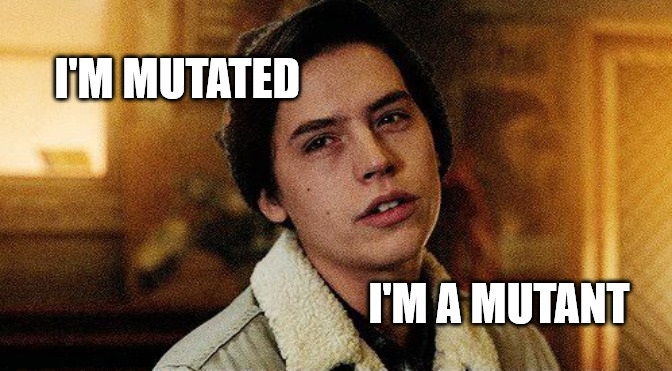 This made me wonder if there’s a connection between the cancer risks and the spinal stuff.  Call it a developmental biology question.  As an embryo’s cells divide and differentiate, they move and branch.  Grossly inaccurate, but you could imagine it like a river delta branching fractally as it runs to the sea.  A mutation is like a stone near the head of the delta changing the shape of the waters downstream.

The mutation is known, but the mechanisms by which these things cause health problems are less understood.  I’m just wondering, when I was an embryo, did the mutation throw some shit in the river, neighborhood of my lumbar stem cells, that made both the spine and internal organs “downstream” from it more likely to fuck up?

Do the pancreas and colon even come from the lumbar part of the embryo, or do they grow in a different segment and migrate to their respective positions?  If the latter is true, my notion doesn’t hold up.  Every DNA-having cell in my bod has the same issues, whatever they mean.  I also have two other mutations that could mess up children if I had them, so good thing I’m no breeder, and another mutation with unknown ramifications.  It might explain the telekinesis and laser eyes.

Something bad happened in my not too distant ancestry and that’s life, babey.  Something to think about when you aren’t sleeping.
–