Just used up the last of my stamps on letters to elected officials.  Time to order more.  This freethinkingahead.com post on postage stamps is from January 2016.  I’ll order more flag stamps, given my audience.  Though I have thought about going with Wonder Woman next time….

Admission: I buy far more postage stamps than I’ll ever need for the cards and letters I mail. Something about the imagery—these neat presentations of nature and history and culture—combined with the utility of stamps makes them irresistible. To me, anyway. So, of course, I was excited to see the preview of the USPS’s 2016 stamps, specifically the ones that feature present and former planets and the moon. 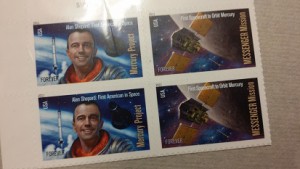 The images on these stamps are fascinating, but the visuals interested me less than what I’m hoping their presence signals. Given that many in the US Congress engage is so much science denial, for instance, it’s good to see images of the eight planets and Pluto accompanied by information on the missions and technology that made these images possible. We as citizens need to support this sort of research. And putting eye-catching representations of the results of that research on something as public as stamps will, I hope, bring this need to our collective attention, if in a small way.

Here’s where you’re probably wondering why I’m writing about something as trivial as postage stamps, even if they can promote the wonders of science. Letter writing is essentially a luxury hobby engaged in by a rather small subset of the US population. And most stamps won’t be used for letters but for mailing bills and other business correspondence in circumstances wherein the imagery most likely won’t be noticed.

That said, let’s look at another of the 2016 stamps: those celebrating Star Trek. Yes, Star Trek is science fiction, not science. It’s become part of our national mythos, part of the story that we tell about ourselves as Americans. We’re willing and able to go to the moon; we’re contemplating going to Mars. Why not further out? Why not work—peacefully, with other nations, with a focus on discovery—toward the sort of future Star Trek allows us to imagine ourselves in?

This story telling is the sort of conscientious activity that letter writing is: we craft who we are, who we want to be. Sticking a stamp on a letter may be a minor part of that process, but it is very much a part of it. So yes, there are postage stamps with images of planets and information on how those images were obtained, and that’s a good start. But it’s not enough. Quite often, people deny scientific claims for religious reasons, and religions abound with stories that their respective followers can find themselves in. Anecdotes function in much the same way to promote unfounded health claims. What we need as a nation is more ways of getting ourselves individually and collectively into the stories science tells us.

Can a postage stamp do that? Probably not. But it’s a start.