Missed the first part?  Go to The Bolingbrook Babbler to check it out!

Connie Herbert slipped the badge between the seat and the armrest, cleared her throat, and pulled at her neck gaiter. They had a job to do, and if she was lucky, no one in Gabriel’s Crest would find out who she was. Not even Mary–the third Mary of Mary’s Meat Shop–who might remember something of Connie’s eyes. Or the eyes that she shared with so many of the women in her family.

Connie looked over at Mateo at the wheel of the pickup truck. “You think we’ve got the wrong ant hill?” They’d worked a hundred of these parties together over the last twenty years, cleaning up before anyone thought to get their hands dirty on substances the Feds wouldn’t know what to do with. If anyone knew something was wrong, though, with the party or anything else, it would be Mateo.

“So, I think we’ve got the wrong party, confreres,” Kyle said. Except for the way he spoke, he could have easily been mistaken for a bored farm kid from some town thirty miles away but seemingly in the same corn field. Fresh out of college, he landed on their team. “I mean, this rural setting just jeopardizes their contraband commerce.”

Mateo turned toward the back seat. “Small towns like this, they thrive on local legends. Best business is where they believe in what they’re buying.”

“You’d know first hand, small town boy like you, Kyle,” Connie said. Her voice wavered, and she cleared her throat. “Can’t get this dirt road dust out of my lungs.”

“You never get used to that, do you, big city gal like you?” Mateo shook his head at her.

Connie tried not to think about what that meant. Like her, he was from Chicago. She let it lie at that. He was, for all intents and purposes, family to her, like so many on the teams she’d worked on had become. But she couldn’t help thinking about where she came from, if not directly. Story was that her grandmother and great aunt had lived in some small town like this, though Connie’s dad never let slip the name of the place. Connie’s grandfather had gone off under “mysterious circumstances,” that long phrase that sounded like a magic spell. Some commotion around her grandmother’s sister, too. Her dad was so young when they pulled up stakes that he hardly remembered either of them. “Look, I doubt it’s really what they say it is, Kyle. It’s just a name. It’s just a marketing gimmick.”

“Then why are we carrying a metric crap ton of antivenom in the cooler, Connie?” Katie pulled her medic’s bag into her lap. “Did you fall for the marketing gimmick too? Because that’s going to do a giant load of bull plop for anyone who uses it, if I’m getting the big picture right on this.”

“If we’re lucky,” Katie said, her medic’s bag in hand.

If they were lucky, no one in that raucous, dressed-up crowd would know what they were doing.

Or, she shuddered, what.

Read Part 3 over at Impossible Me!

First, if you haven’t read Ruth Bader Ginsburg is dead, and we’re the ones going to hell over at Pervert Justice, I recommend that you do.

Second, I’ve written a couple postcards that I’ll mail out to my Republican senators tomorrow.  They’re up at my website: http://www.tdwalker.net/postcards/  If you’d like to use them as is, please do.  Or update them as you’d like.  Printing instructions are included on the linked page.

Contact information for senators can be found here: https://www.senate.gov/general/contacting.htm   Usually, I just send postal mail to their local offices, since it arrives sooner.

I’m off to make a couple phone calls to their offices now.

Since I’ve been writing postcards to elected officials, I thought I’d share them with those who might be interested in sending out similar messages to their elected officials: https://www.tdwalker.net/postcards/

The templates on this pages are .doc files, and you can update them with your information and the information of your elected officials.  You can send them as is or update the text as you’d like.

I’m putting the postcards up on my personal website, but linking them here because a.) these cover many of the issues I’ve wanted to blog about but haven’t,  b.) they’re probably of interest to readers here, and c.) I wanted to put these out here to make things quick and easy for those who want to write to elected officials about these topics.  Some of the language is specific to Texas (see my “oh, hey, you like business!  the HEROES Act is good for business!  so go vote for it!” to my senators), but for the most part, these can be generalized for audiences across the US.

Instructions for printing and postage are on the page as well.  The /postcards page isn’t linked through my website menu, so if you go to the front page, you won’t find it there.  (Also, there’s an annoying popup on my front page asking if you’d like to join my email list in exchange for a near-future political feminist science fiction novelette, so don’t go through there if, like me, you don’t like pop-ups.  (Seriously, if you want the novelette, and you’re a reader here, just email me.))

If you have any suggestion for future postcards, please let me know.

I’ll be giving a talk at the Fellowship of Freethought Dallas gathering this month:

The Creative Skeptic: Or, How to Live the Magic, Embrace the Mystery, and Invoke the Muses When You Don’t Believe in Supernatural Forces

Are you an artist and a freethinker? A crafter and skeptic? A coder and a humanist? A social organizer and an atheist? A fan of movies and a fan of rationality?

Then join us for a workshop on creativity for freethinkers. We’ll discuss ways in which we can use advice for creative types that is too often couched in spiritual terms. And we’ll play lively social games designed to help you tap into your creativity, without resorting to calling on a Muse.

Don’t consider yourself creative? Don’t worry! We’ll address ways in which consumers of creative products–movies, TV, games, books, and so on–can also consider themselves creative and thus apply what we talk about in the gathering.

So come explore the mysteries of creativity with us. It’ll be magical….

Fellowship of Freethought Dallas gatherings are held at the Walnut Hill Recreation Center (10011 Midway Road, Dallas, TX) and begin at 11am.

END_OF_DOCUMENT_TOKEN_TO_BE_REPLACED 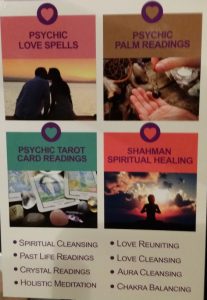 So, this is a first.  We’ve had our share of Christian proselytizers of various denominations around these parts, but never an advert for our local psychic.

Found this flier hanging on my door this afternoon.  Our yard is a bit of a mess, so I suppose it’s fine to assume that our spirits, loves, and auras could use a good once-over too, perhaps.

Maybe I’m being a bit pedantic here, but I think if I were going in for love spells, I’d like my intended target not to be psychic.  A bit of mystery keeps the magic in the relationship, right? 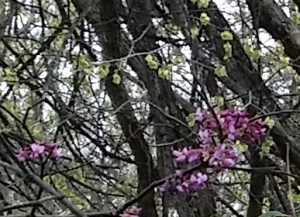 Spring sprung up a bit early around here.  The altheas came out first in mid-February, which seemed too early.  A desert willow that I feared had died last year came out a couple weeks ago, too.

Here’s an attempt at a picture of the redbud tree nearby, behind which is an elm that has been gracing us with quite a bit of pollen of late.

My attempts at gardening with annuals always seems to fail–far too many critters around here end up eating what I plant.  Ah, well.  Maybe I should say I’m growing the odd assortment of small birds, muscovies, and squirrels?

The attorneys who assisted the travelers detained by Trump’s “Travel Ban” at the Dallas-Fort Worth International Airport are asking for help in maintaining a space to continue their work.  From the DFW Detained GoFundMe page:

These funds will be used to secure meeting space at DFW International Airport and puchase necessary supplies. NOT ONE DOLLAR of the money raised will be used to compensate the attorneys involved, who are donating their time and talents to this humanitarian effort.  Any funds which are leftover after our work concludes will be donated to ACLU.

Chip in if you can.  And if you know of similar calls for funds from around the nation, feel free to post in the comments.