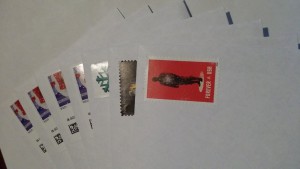 The most recent stack of letters that went out to elected officials yesterday.  Yes, that’s a Star Trek stamp above the New Horizons stamp.

Though I’ve been writing quite a bit lately, the bulk of what I’ve written has been to my elected officials regarding the confirmation hearings and the Affordable Care Act, among other things.  The same for reading: it’s all been about proposed bills and potentially disastrous nominees.

That said, I am trying to read more poems, especially political poems.  There’s something energizing about political poems that manage to capture both the urgency of the situation as well as the personal, even if the speaker of the poem isn’t the author.  So it was with this morning’s poem from Rattle, Abby E. Murray’s “Poem for My Daughter Before the March.”

Which brings me to the first of the Open Book posts, in which I ask, “What are you reading?”

Climate Change is Real, Y’all » « From the Archive: Space, Science, Stamps, and Storytelling