This morning, PZ Myers posted an examination of the evidence relevant to the claim that bloggers stir up controversy solely or primarily to garner attention and blog traffic. This is a relatively common claim from cynics who believe, for whatever reason, that bloggers are all craven, fame-hungry, unprincipled agitators. I myself have had this accusation thrown at me from time to time, and while I don’t like it, I also don’t give it much time or energy because hey, stupids gonna stupe.

What makes a blog grow is 1) regular updates, 2) consistent themes, 3) maintaining the attention of other blogs out there, 4) cultivation of an interactive readership that adds value to your blog, and 5) time (slow steady growth is best, and it can’t by definition happen overnight). Probably also good writing, but I wouldn’t know much about that, and I’ve also seen some gloriously well-written blogs that idle along with light traffic because they ignore my top 5 suggestions.

Which is fine as his personal opinion, but it’s not much more evidence-based than the claim that they’re built by constantly courting scandal. While PZ has built a juggernaut of a blog, and followed that up by helping to build a juggernaut of a blog network, I don’t know that he can really be cited as an authority on what it is that makes a blog successful. Considering that I’ve heard him on many occasions say that the blogging game is random and fickle, I’m going to give him the benefit of the doubt and assume that this was his own observation only, and not intended as a statement of fact.

The main reason why his post rubbed me the wrong way is because of this:

Those give little bursts of attention from people who weren’t interested in your blog in the first place; they visit to see the source of all the commotion, and then they leave.

The following are all observations from my own experience only, so obviously I am subject to a whole heap of biases, but I don’t think my concerns with this statement are unwarranted.

PZ’s statement about the one-time traffic from popular aggregators or sharers is only partially true. I started this blog in February of 2010 knowing pretty much nothing about blog management and promotion, aside from what I could intuit or think my way through. My first ‘big’ post was a story about a creationist who had come to Vancouver and said creationy things. My traffic went way up from a trickle to a… slightly larger trickle. It was indeed the case that the majority of people who came to look at my one post never came back ever again, but a lot of them kept reading.

My next ‘big’ post was a similar exposé on work the Vancouver skeptics had done trying to raise consciousness about Deepak Chopra, which happened to dovetail nicely with a post that went viral for reasons I still don’t understand. Again, I observed the same pattern. Traffic went way up, came back down eventually, but never dropped to its original level. Some people stuck around, above and beyond the expected incremental growth of people just happening across my site and wanting to read more. It was a consistent pattern – every time traffic spiked, I knew I could reliably expect a resulting increase in regular readership.

I have observed a similar pattern since this blog moved to FTB:

Above is a summary of this site’s weekly traffic (I’d show the daily, but this graph is messy enough – the daily one is almost incomprehensible) since the launch. The first big ‘peak’ there at around W45 is my series on System Justification (I am pretty sure). The die-down afterward was the result of Christmas vacation and a break in posting. The second giant peak was my post about shuffling feet, which also went viral (this time for reasons I understand). There are a couple of peaks after then that, interestingly, do not correspond to increases in traffic. In both cases, what they do correspond to is times I was on vacation and stopped posting stuff regularly. However, after the Thunderf00t incident, we see another increase in average traffic beyond the simple one-time excitement of a sexy post. 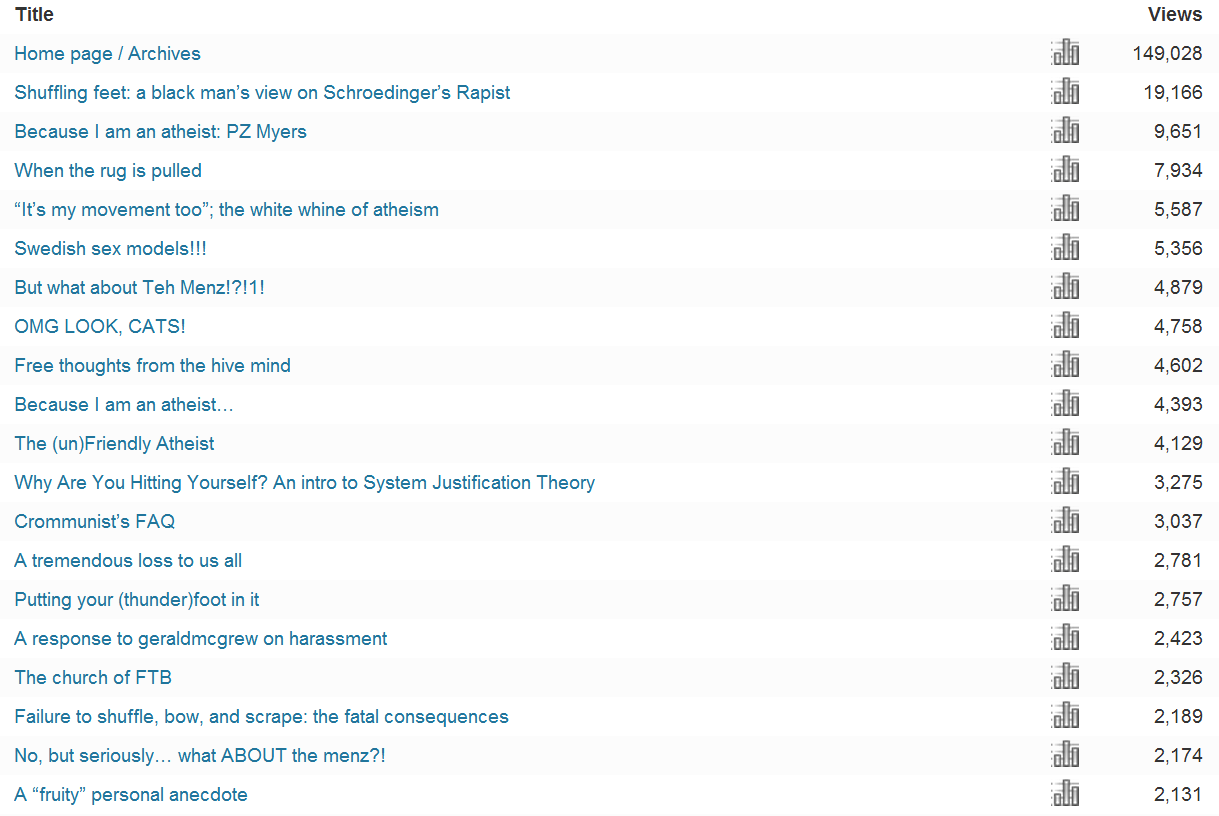 The above figure is a list of my 20 most popular page loads (well, 19 if you don’t count the loading of the main page). My Thunderf00t post is there, as is another post about sexual harassment policies. Aside from those two, however, none of my top traffic-generating hits were particularly controversial (unless you count the time when I picked a fight with Jen and Greta about cats. That was was a joke, and I had no idea it was going to turn into a ‘thing’). I suppose you could count my criticism of Hemant Mehta’s bit about Alain de Botton as a post classifiable under ‘controversy’ – I wouldn’t, but I can see how a neutral observer could see it that way. It is also worth noting that the list is skewed heavily toward the past handful of months.

Based on the above data, you would be extremely hard-pressed to find evidence to support your conjecture that controversial posts drive traffic (at least my traffic). However, taking the temporal graph in concert with the cross-sectional one, I can find similarly little evidence to support PZ’s conclusion that high-traffic posts do not build a regular reader base. While I generally agree with his list of tips of how to build a successful blog (indeed, the fact that my traffic consistently dips when I stop posting and rebounds when I start again lends credence to my #1 recommendation for new bloggers – post regularly if you want to build an audience), I can’t agree with him that you can’t juice your stats by periodically throwing in something that you know is going to get a lot of attention. If you want to refute the claim that you can’t build a consistent readership based on controversy alone, you’ll need more data than I’ve seen anyone present so far.

Geez, I was going to do a whole thing on ‘internet fame’ and ‘climbing the ladder’ and other blog-related claims that get thrown at me from time to time, but I am out of space. I’ll have to make it its own post.