Honorary fellowship is conferred by UCL to people who “have attained distinction in the arts, literature, science, business or public life”. The Times approached those fellows whose contact details were available online. Of those who responded, 21 criticised the university, four were neutral and none backed UCL.

Notice the problems? How can they know “those who responded” were representative of anything? How can they know people who took the opposite view didn’t just decide not to give the Times any more oxygen? How can we know the Times really did approach “those fellows whose contact details were available online”? Haha we can’t, they didn’t even approach David Colquhoun, whose contact details are available online.

David Colquhoun ‏@david_colquhoun 3 hours ago
@whippletom @hildabast @thetimes I’m an Hon Fellow of UCL since 2004, and I wasn’t asked so even apart from lw response, it’s dodgy

Hilda Bastian shared her comment on the Times article: 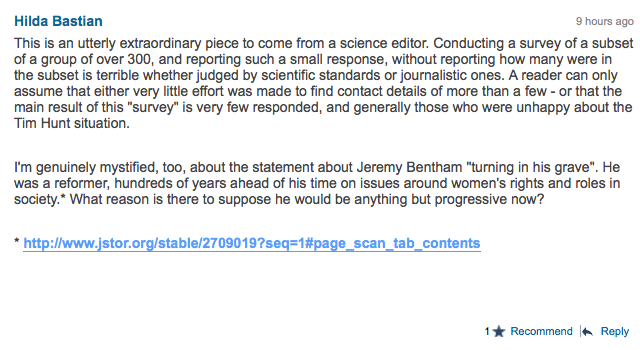 This is an utterly extraordinary piece to come from a science editor. Conducting a survey of a subset of a group of over 300, and reporting such a small response, without reporting how many were in the subset is terrible whether judged by scientific standards or journalistic ones. A reader can only assume that either very little effort was made to find contact details of more than a few – or that the main result of this “survey” is very few responded, and generally those who were unhappy about the Tim Hunt situation.

I’m genuinely mystified, too, about the statement about Jeremy Bentham “turning in his grave”. He was a reformer, hundreds of years ahead of his time on issues around women’s rights and roles in society.* What reason is there to suppose he would be anything but progressive now?

No Fifth for you » « Guest post: So, should I make poutine instead?