David Futrelle points out the replacement of the fading GamerGate with the new and exciting Shirtstorm.

By all rights, the furor over rocket scientist Matt Taylor’s cheesecake shirt should have died down by now. After being chided earlier this week for marring the celebration over the landing of a space probe ON A GODDAMNED COMET by doing interviews in a tacky shirt covered with half-naked ladies, Taylor offered a brief but heartfelt apology. You would have thought we’d all be able to move on.

And you would also have thought that would be what Matt Taylor would like even more than everyone else – but never mind that, that’s not important when there’s a new opportunity to vomit on feminism.

Not so fast. Because these days apparently no controversy can ever be over as long as it serves someone’s interest to keep it going. And so a loose but very familiar coalition of reactionaries and antifeminists and angry techies have started flogging an amorphous cause they call#Shirtgate or, more popularly, #Shirtstorm, purporting to be outraged that Taylor was “humiliated” into apologizing.

So many of the angriest voices in this, er, conversation are #GamerGaters it looks a lot like a sequel. Call it GamerGate Part Two: The Straw Graspening.

There are tweets. Futrelle shares some.

Of course they have. Others are camped out in my Twitter mentions right now, talking to each other.

Dean Esmay turns up, and so does Christina Hoff Sommers. But not Dawkins, for some reason. He should be there. 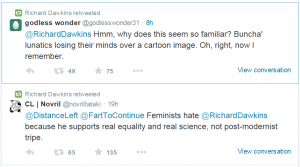 Richard Dawkins retweeted
godless wonder @godlesswonder31 · 9 hours ago
@RichardDawkins Hmm, why does this seem so familiar? Buncha’ lunatics losing their minds over a cartoon image. Oh, right, now I remember.

Science for the public, baby.