Richard Bartholomew debunks a photo of a purported “witch” used to fuel hysteria about witches.

Nigerian sceptic Leo Igwe has drawn attention to a Facebook post by a certain Pastor I.C. Ezeugwu, in which Ezeugwu describes an event he held in “a remote village in Edo State”:

I titled the crusade “Operation Kill the Witches”. This title was necessitated as a result of the activities of witches in that village which included destroying the destinies of young people.

I took a look at that Facebook post – it dates from August 2013, well over a year ago, yet people are commenting every few seconds to say…”Amen.” It’s rather frightening. 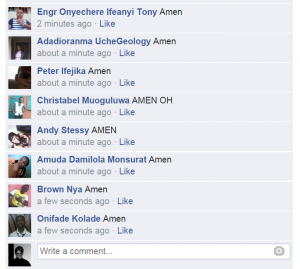 Bartholomew tracked down the image and found that it has nothing to do with “witches.”

Ezeugwu’s post is illustrated with a photo of what appears to be a dead human figure with wings; presumably, this is supposed “evidence” of the existence of witches:

That’s not an image I have seen before, although apparently it’s been doing the rounds for a while; in May 2013, Pulse234 published it under the heading: “PHOTO: Witch Woman With Wings: Real or Fake?”

It  in fact shows an art piece called Angel. It was created in 2008 by two Chinese artists, Sun Yuan and Peng Yu. The photo was taken while the model was on display at the Saatchi Gallery in London. It’s a “life size sculpture in fibre-reinforced polymer and silica gel”.

Human beings, making up bogus pretexts to murder other human beings. So helpful.