A whole week with no documentation! That was a nice break. 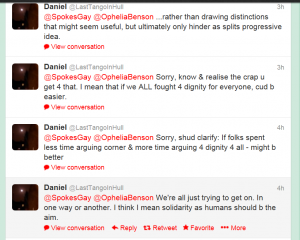 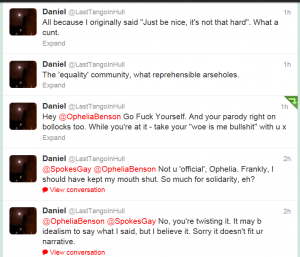 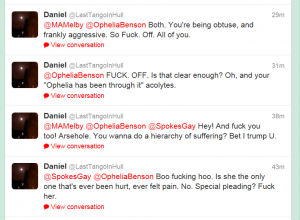 I borked the last tweet and the account (it was a new one, six tweets, all of the same type) is gone, so I’ll include the screencap too. 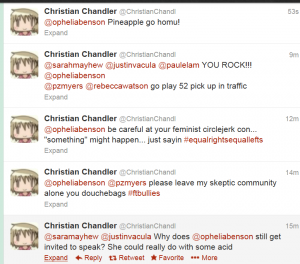 Wow. She tagged Michael Nugent. She’s actually actively trying to get me disinvited from a speaking engagement at a conference. Now that’s harassment.

It’s a lie, too. I don’t bully secular women. I don’t, for instance, do what Sara Mayhew does. I don’t endlessly tweet about people I dislike. I don’t try to get them disinvited from things. I don’t make up shit about them. I’ve never bullied Sara Mayhew. I’ve done my best to avoid her. But it does me no good – she still forced herself on me at Eschaton, when I was sitting at a table with Eric and couldn’t escape. She still tweets about me every few days, apropos de rien, just to be malicious and persistent and nasty.

Intensifying. Or maybe not, I don’t know – I don’t see “Mykeru” much. I happened to see one though, and where that was there were more. It seems pretty intense to me. Some random guy ranting about me.

Twitter Twitter Twitter. This business where people you’ve blocked turn up on your timeline anyway when someone else replies to them – it’s irritating. My timeline keeps getting all messed up that way. Like right now.

What prompted that? No idea. As always. And what does it have to do with anything? No idea, again. Michael Nugent is running an atheist conference, not an academic conference. It’s not limited to academics; why would it be?

I’m not an academic. No indeed, and I never said I was. Ho hum.

Another sample. (It’s always a tiny sample you know. I keep seeing people saying I’m documenting the harassment. Ohgodno. Only a tiny sample. Only from Twitter and the occasional blog or FB post. Tiny sample.) 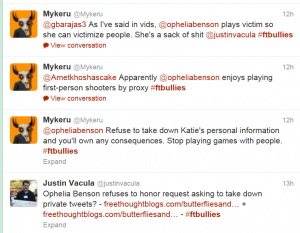 @gbarajas3 As I’ve said in vids, @opheliabenson plays victim so she can victimize people. She’s a sack of shit @justinvacula#ftbullies

@opheliabenson Refuse to take down Katie’s personal information and you’ll own any consequences. Stop playing games with people. #ftbullies

On it goes. I did have plans to talk about now for something completely different today, that is, to talk about a lot of things that have nothing to do with local harassment, but – it keeps rolling in and some of it needs documenting.

I got a Facebook notification this morning that Reap Paden had tagged a photo of me. Oh goody. I clicked on it to see what variety of shit it was this time. It took me, for some reason I don’t understand, to Vacula’s re-posting of it. This photoshop: 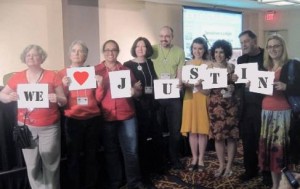 This is a bully-trope that I particularly detest – this business of relentlessly harassing people, then when the people say stop harassing me, pretending the harassed people are actually nursing a secret love for the harasser. ElevatorGATE’s impersonation Twitter account with my name on it was doing variations on that on #WISCFI during the conference – using profile logos saying “I heart Justin” and the like. Yeah no. I like lots of people. I love quite a few people. I do not love or like any of my harassers.

I told Vacula to leave me alone. He said no. 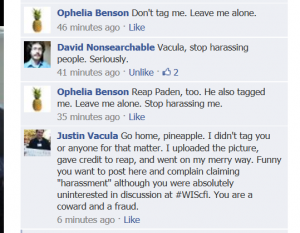 Ophelia Benson Reap Paden, too. He also tagged me. Leave me alone. Stop harassing me.

Justin Vacula Go home, pineapple. I didn’t tag you or anyone for that matter. I uploaded the picture, gave credit to reap, and went on my merry way. Funny you want to post here and complain claiming “harassment” although you were absolutely uninterested in discussion at #WIScfi. You are a coward and a fraud.

And on it went. 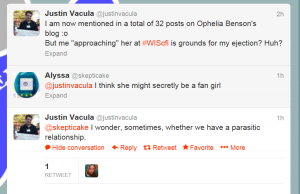 It’s a bit like taking mentions in a police report as a flattering form of interest.

I managed five days without adding anything. Cause for optimism, don’t you think? 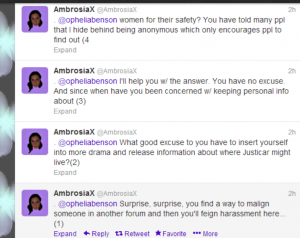 .@opheliabenson Surprise, surprise, you find a way to malign someone in another forum and then you’ll feign harassment here… (1)

. @opheliabenson What good excuse to you have to insert yourself into more drama and release information about where Justicar might live?(2)

. @opheliabenson I’ll help you w/ the answer. You have no excuse. And since when have you been concerned w/ keeping personal info about (3)

. @opheliabenson women for their safety? You have told many ppl that I hide behind being anonymous which only encourages ppl to find out (4

I don’t know what she’s talking about with “malign someone in another forum.” As for “feign harassment” – what a joke, given her persistent harassment (and maligning) of me. As I think I’ve said before, I have literally no clue why she is so fascinated by me and so enraged by me. As far as I can tell it’s just some inane bandwagon thing, but why this particular bandwagon I do not know.

Then “insert yourself”? That’s bullshit. I didn’t “insert myself”; Justicar named me in that video. My name is the first thing he said after the introductory throat-clearing. I am one of the people he harasses. And I didn’t “release” info about Justicar, he has said he lives in or around Seattle. 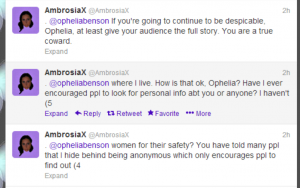 . @opheliabenson women for their safety? You have told many ppl that I hide behind being anonymous which only encourages ppl to find out (4

. @opheliabenson where I live. How is that ok, Ophelia? Have I ever encouraged ppl to look for personal info abt you or anyone? I haven’t (5

. @opheliabenson If you’re going to continue to be despicable, Ophelia, at least give your audience the full story. You are a true coward.

I have said that it’s easy for her to dismiss the harassment of people like me (including me) when she does it under a fake name. I say it again. Using a fake name makes it easier for her to harass and belittle people without repurcussions in her real life.

I can’t give my “audience” the full story because that would require screen capping tens of thousands of words every day, and looking at them in order to screen cap them. But I do not think I’ve given them a distorted story. And no I am not a coward. I dislike being harassed. I dislike it when total strangers to me such as “Ambrosia” make it a hobby to talk shit about me on social media. That does not make me a coward. 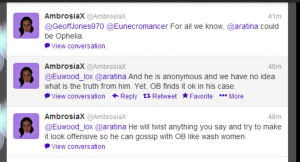 @Euwood_lox@aratina He will twist anything you say and try to make it look offensive so he can gossip with OB like wash women.

@Euwood_lox@aratina And he is anonymous and we have no idea what is the truth from him. Yet, OB finds it ok in his case.

“He” there is Aratina. I consider Aratina’s pseudonymity fine because he doesn’t use it to harass people.

@GeoffJones970@Eunecromancer For all we know, @aratina could be Ophelia.

Just one more heedless casual lie. Just one more breezy casual attempt to trash the reputation of a real person for no apparent reason except malice and stupidity.

Big disagreement with Sara Mayhew here. What is “creeping”? She tweeted to Improbable Joe that I “creep” her. I replied that it’s not creeping to check on what people are saying about you. She says that’s exactly what creeping is.

I don’t see it. I think “creeping” (I usually call it monitoring or stalking) is checking what people are saying, tout court. I think checking what people are saying about one’s own dear self is in a different category, especially when said people have a history of unilaterally arbitrarily for no apparent reasonly saying hostile unpleasant things about said dear self. Mayhew has a history of doing that to me, so I look at her timeline sometimes.

Ah yes, the ever-popular “she’s so old and ugly!!” trope. There must be only young pretty people in Our Movement!

Nah. I’m not going to indulge her.

Wow – this one I wasn’t expecting at all. Not even a little bit. The post about whether skepticism is really a movement was just a thinking aloud post. It wasn’t an insult or an attack or even a criticism.

And yet – somehow – it was taken as such.

“A Motionless Movement” says Ophelia Benson. From someone who does zero writing, research, outreach, or popularising of skepticism.

Well. That’s put me in my place. But I wasn’t saying skepticism is an underachiever or anything. I was just trying to figure out if it really is a movement, if I think of it as a movement, and the like. Lots of very good things are not a movement.

I should apologize. Dear Skepticism: I apologize for saying I wasn’t sure you’re a movement. I’m very sorry. I had no idea it would upset you. If you like to think of yourself as a movement, go ahead. 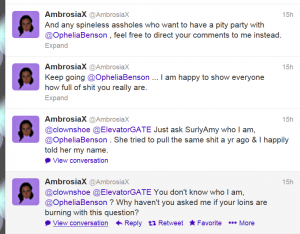 @clownshoe@ElevatorGATE You don’t know who I am, @OpheliaBenson ? Why haven’t you asked me if your loins are burning with this question?

@clownshoe@ElevatorGATE Just ask SurlyAmy who I am, @OpheliaBenson . She tried to pull the same shit a yr ago & I happily told her my name.

Keep going @OpheliaBenson … I am happy to show everyone how full of shit you really are.

And any spineless assholes who want to have a pity party with @OpheliaBenson , feel free to direct your comments to me instead.

This shit? What shit? Documenting the fact that you talk a lot of lying smack about me?

Full of shit? Why? Because I point out (and document) that you talk a lot of malicious lying smack about me?

She’s so angry, and apparently it’s all because I point out what she is doing. That’s odd.

Actually, @OpheliaBenson , why don’t you ask Melody who I am. I had no clue who she was and she blocked me after my conversation with Amy.

Would you like to meet me at WIScfi, @OpheliaBenson ? Would that even the playing field?

Oh, great. Does that mean I have to worry that every woman I don’t know at WiS2 might be “AmbrosiaX”? 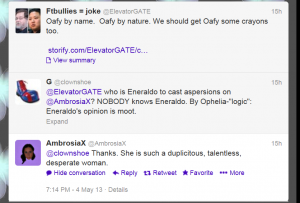 No, it isn’t. Eneraldo has an apparent name, not a mere handle. Sure, it could be an alias, but “clownshoe” and “ElevatorGATE” and “AmbrosiaX” are self-evidently aliases. The three shit-talkers make it unmistakable at a glance that they are not accountable for their harassment because they do it under a false flag, like those corporations that don’t want to pay for double hulls so they sail under the Liberian flag, instead.

@clownshoe Thanks. She is such a duplicitous, talentless, desperate woman.

And all three of them are in a big old snit because…because they cyberharass me and I document their cyberharassment – so they’re in a rage at me. Makes a lot of sense.

A failure to communicate » « The exodus