Well not exactly new, because this was last January, but it’s new to me. I’m quite amazed by it. 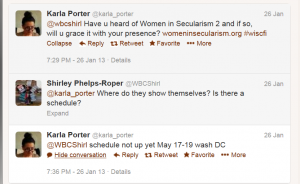 @wbcshirl Have u heard of Women in Secularism 2 and if so, will u grace it with your presence? http://womeninsecularism.org #wiscfi

@karla_porter Where do they show themselves? Is there a schedule?

@wbcshirl schedule not up yet May 17-19 wash DC

That is, indeed, a novel way to stir up trouble.

If Ophelia Benson really wants WBC at Women in Secularism 2, I can call Steve Drain and maybe have that arranged…but I have no plans to.

Wtf? If I want them there? What the hell does he even think he’s saying? I didn’t tweet at Shirley Phelps-Roper to ask if she was going to WiS, and then give her dates and location.

Not to mention the whole quasi-threat thing. I have no [current] plans to, but I can. You want WBC at your event? I can maybe have that arranged. Nice little place you got here, shame to see it messed up.

Collecting » « Welcome to our tent