Sorry for the inconvenience, but I’m going to have to change the date of our meetup to Sunday the 19th. Same time and place. Apparently there’s some new grad student social event on Friday that I’m expected to attend that I just found out about. Sorry again for the confusion and getting your hopes up if you could attend Friday but not Sunday.

If it’s any consolation, Sunday is Talk Like a Pirate Day. The Seamonster Lounge seems like a very appropriate place to celebrate this Pastafarian holiday with a bunch of heathens.

It looks like Friday the 17th will be the best day to have a little Blag Hag Seattle meetup for your schedules and for mine. Gah, change of plans, sorry! Make that Sunday the 19th. Here are the details:

I already found the place while wandering around Wallingford, so I know I won’t get lost, yay! Feel free to show up later if you want.

If you’re pretty sure you’re coming, please let me know and indicate if you’re bringing anyone else. Just need to know how many chairs to save. Can’t wait to see you guys!

I haven’t even been in Seattle for 48 hours, and this is what I just found on the steps leading up to my place: 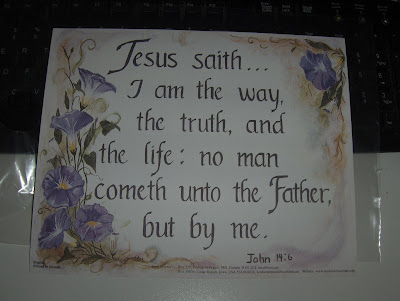 Though as I went back to my car to get more groceries, I noticed all the houses had this on their steps. I still like pretending that I’m some infamous evil atheist worth personally targeting with silly evangelizing.

Oh, and the back? Just the same old “Why you should accept Jesus into your heart stuff.” Nothing new to report on there.

Because I made it to Seattle, woooooo!

Somehow Mark and I survived the drive without going too insane. The first day we drove for 15 hours and stopped in Wall, South Dakota. I swear we just happened to end up there when it got dark – we did not stop because of the tourist trap known as Wall Drug. Though since a bunch of my twitter followers insisted that it was hilariously bad, we checked it out. Sorry guys, but it was not worth the ten minutes :P

The second day we drove for 14 hours and stopped at Mt. Rushmore, which was a much nicer stop. Pretty cool, though we didn’t stay for long. We spent the night is Missoula, Montana and were greatly impressed that you can apparently get alcoholic beverages for takeout at restaurants.

The third day we only had to drive 6 hours, but it was by far the worst. South Dakota and Montana were actually pretty beautiful. Idaho was beautiful as well, since we were basically driving through cloud filled mountains, which we don’t exactly have in Indiana. Hell, I get excited when I see a hill. Or a patch of land without corn.

But man, Eastern Washington was so insanely boring. It actually reminded me a lot of the desert grasslands in Arizona where I do field research, but just a lot uglier. And then the last couple hours are a horrible combination of city traffic and mountains, so I felt like I was going to die. But I made it!

My apartment is super nice. I lucked out because I bought it from craiglist based on a couple of photos and talking to the landlord on the phone. It’s a lot more spacious than I expected, and I have more storage space than I have stuff to fill it with. It feels a bit barren at the moment, but I’m sure that’ll change soon enough. Oh, and the entrance is adorable, since it’s a basement apartment: 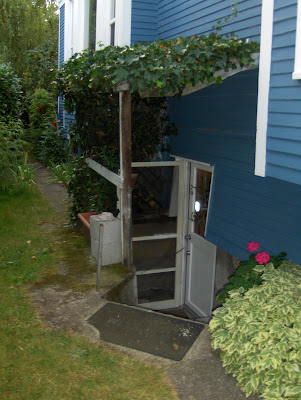 I feel like I’m living in the Secret Garden. …Or that I’m some sort of garden troll, whatever.

I am so exhausted. The combination of 35 hours of driving and sleeping on an air mattress until my bed arrives is not very relaxing. Not to mention I’m unpacking and buying various apartment necessities that I either couldn’t bring or never had. I still need to go grocery shopping, since this is what my refrigerator currently looks like: 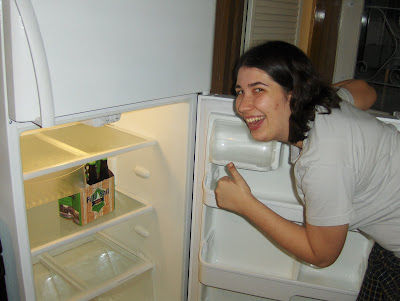 I can think of no more appropriate way to kick off grad school than an fridge that’s empty except for a six pack of beer. Hurray college.