Yesterday President Obama was speaking at a town hall event in Maryland. The first person to ask him a question was none other than Amanda Knief, Government Relations Manager for the Secular Coalition for America. Go Amanda!
Transcript from Friendly Atheist:

Knief: I’m an atheist, and in Zanesville, Ohio in 2008, you asserted that no organization receiving taxpayer funds would be able to discriminate in hiring or firing based on a person’s religion. However, you have not rescinded the Executive Order that permits this type of discrimination.

In a time of economic hardship, when it’s difficult for a person to get a job based on her skills, what would you say to a woman who has been denied employment because of her religion or lack of religious beliefs by a taxpayer-funded organization?

Obama: Well, this is a very difficult issue, but a more narrow one that I think might be implied. It’s very straightforward that people shouldn’t be discriminated against for race, gender, sexual orientation, or religious affiliation.


What has happened is that there has been a carve-out dating back to President Clinton’s presidency for religious organizations in their hiring for particular purposes. And if — this is always a tricky part of the First Amendment. On the one hand, the First Amendment ensures that there is freedom of religion. On the other hand, we want to make sure that religious bodies are abiding by general laws. And so where this issue has come up is in fairly narrow circumstances where, for example, you’ve
got a faith-based organization that’s providing certain services. They consider part of their mission to be promoting their religious views.


But they may have a daycare center associated with the organization, or they may be running a food pantry. So then the question is: Does a Jewish organization have to hire a non-Jewish person as part of that organization?


Now, I think that the balance we’ve tried to strike is to say that if you are offering — if you have set up a non-profit that is disassociated from your core religious function and is out there in the public doing all kinds of work, then you have to abide generally with the non-discrimination hiring practices. If, on the other hand, it is closer to your core functions as a synagogue or a mosque or a church, then there may be more leeway for you to hire somebody who is a believer of that particular religious faith.


It doesn’t satisfy everybody. I will tell you that a lot of faith-based organizations think that we are too restrictive in how we define those issues. There are others, like you, obviously, who think we are not restrictive enough.


I think we’ve struck the right balance so far, but this is something that we continue to be in dialogue with faith-based organizations about to try to make sure that their hiring practices are as open and as inclusive as possible.

Amanda was disappointed with the response:

“Unfortunately, the president didn’t address the most egregious aspect of this policy – that religious discrimination is occurring on the taxpayer’s dime. Discrimination is wrong in all forms, especially when it is being funded by taxpayers.” 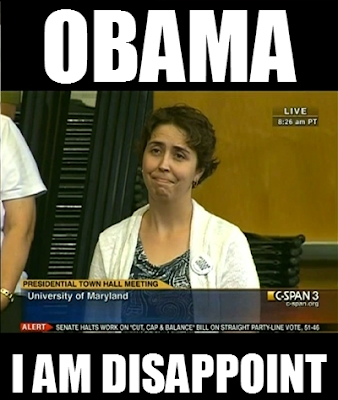 I think this summarizes why I’m disappointed with Obama on so many issues. To me, it’s not doing what will satisfy the most people. It’s doing what’s constitutional. If something makes your religious constituents cranky or not theoretically shouldn’t even be taken into account.

But I know, I know. It’s politics. He wants to get reelected and all. I keep fantasizing that once Obama is in his second term, he’ll rip off his shirt and reveal some sort of godless, gay marriage-loving super hero underneath.

This is post 2 of 49 of Blogathon. Pledge a donation to the Secular Student Alliance here.

Neanderthals and the beauty of science » « And Blogathon 2011 has begun!