While I’m on the subject of bad puzzles from 1995, I want to briefly share one of my favorite good puzzles from the time. Around 1995, I received a book titled 100 Perceptual Puzzles by Pierre Berloquin. It’s apparently a newer edition of an older book titled 100 Geometric Games, copyright 1976.

The book contains a wide variety of puzzles, mostly of the sort that rely on pictures, or require you to draw pictures. Many people are familiar with the puzzle where you have a 3×3 grid of dots, and you’re asked to draw four straight lines through all the points without lifting your pencil. That puzzle is not in this book, and instead it includes multiple harder versions! 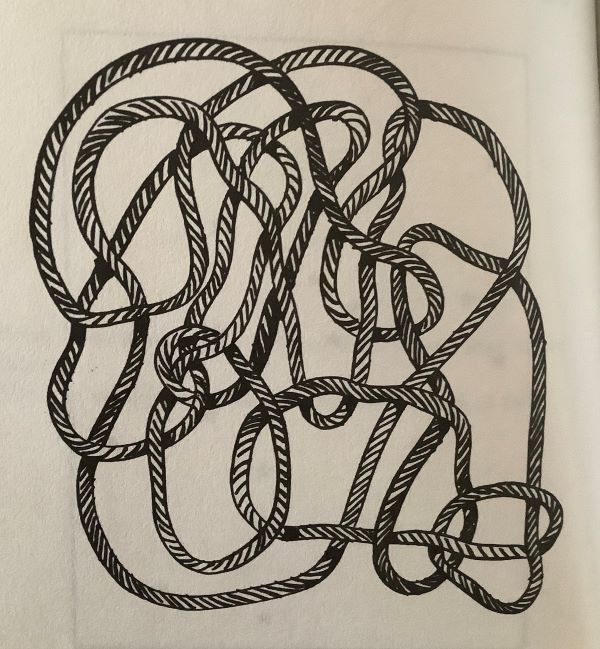 The goal is to figure out how the ropes are linked.

In one of the Mensa Puzzles, I complained that it apparently expected me to draw lines directly onto the card. But the truth is, I could have transcribed the puzzle to my own paper and solved it that way. You know, if I thought it would be worth my time.

But I would willingly spend my time on 100 perceptual puzzles, copying the rope over to my own paper many times, as I diagrammatically unknotted it step by step. These puzzles had me independently reinvent the Reidemeister Moves, mentally sliding ropes across one another until it was simplified to a basic form.

I adored these puzzles so much, that I went on to make one myself.  And then I put it on the banner of my blog.

Atheists who can’t even talk to theists » « Bad Mensa puzzles