I have some questions about Mensa. It’s an organization founded in 1946 whose membership is restricted to people scoring in the 98 percentile of IQ. But IQ is a scientifically dubious concept associated with eugenics and racism, and many people who would qualify for membership probably have better things to do, so I wonder what their membership looks like. I also wonder to what extent it’s just a thing that people sign up for and forget about–maybe subscribe to a newsletter, buy a thing or two from their store.

But this story is more personal–and more petty. It’s the story of why I disliked Mensa from a fairly young age, even though I most certainly would have qualified for membership. See, I received a lot of puzzle-based gifts, and I always thought that those with Mensa branding were the crummiest of them all.

This article was made possible by my rediscovery of one such Mensa product. The product is called Mensa Number Puzzles, copyright 1995.* It consists of a deck of cards with bright solid colors. The cards contain 75 puzzles, followed by the solutions to those puzzles.

*The ISBN is 0-8118-2263-X. When I looked that number up, I found a product titled “Mensa: Mighty Mind Benders: 75 Number Puzzles”, published in 1999, which doesn’t match what my copy says—but it’s apparently otherwise identical.

In this sort of puzzle, first impressions are very important. The puzzle writer needs to build trust with the puzzle solver. If the puzzle solver does not trust the puzzle, then they are not going to be willing to spend a lot of time solving the puzzle, because it might turn out the solution was bullshit all along. Furthermore, since solutions cannot be easily verified without looking at the solution cards, the solver may prematurely suspect that they already have the answer, however unsatisfying it may be.

So let’s look at the very first puzzle in the deck. 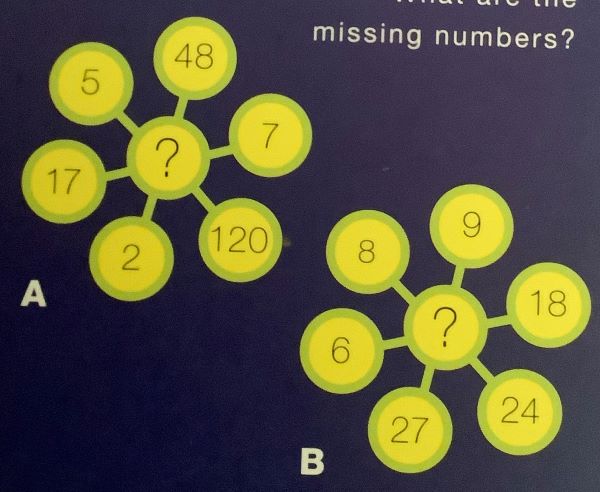 I think this is fair use, but out of respect for copyright, this is the only image I’m sharing.

This puzzle asks you to determine what number goes in the center of each cluster. That’s it.

The first problem with this puzzle is that there’s no obvious way to verify a solution if you have one. A better puzzle design would show two completed clusters, and followed by a third incomplete cluster. When you find a pattern that successfully predicts the first two clusters, that’s a sign that you solved the puzzle and can check your answer.

But since the puzzle does not provide you with any completed clusters, the solution is severely underdetermined. You could hypothesize, for instance, that the number in the center is equal to the sum of all the other numbers. There is nothing in the puzzle to contradict this, except common puzzle conventions about “elegant” solutions. It’s not good to rely on puzzle conventions in the very first puzzle, because puzzle conventions vary from author to author, and any puzzle needs to first establish its own conventions.

So the puzzle solver is left to guess that there is some pattern among the six numbers in each ring. Your thought process might go: How does 48 go to 7 to 120? Is it significant that the pattern alternates high and low in the first ring, and is increasing in the second ring?

But if you had any of these thoughts, they were all dead ends. The solution only has to do with opposite pairs of numbers. If you take numbers on opposite sides and divide them into each other, you get a common number, and that’s the number you put in the center. And there’s one exception to the rule, which is that 17 and 7 get added instead of divided. I’m not saying this puzzle is impossible, and you’re welcome to brag about figuring it out before I explained it. But it’s definitely not a good puzzle.

After spending four paragraphs explaining why the first puzzle is bad, I’m going to spend far less time talking about the other 74 puzzles. They’re not all bad. But there are definitely enough bad ones that it engenders a lack of trust, and the lack of trust weighs down even good puzzles. The second puzzle assigns number values to names and asks you to evaluate a new name–the solution involves converting letters to single digits 1 through 9, and adding the digits up. Another puzzle provides a list of 25 numbers attached to arithmetic operations, and asks you which five numbers will equal 1–the search space for this one is just unreasonably large. Another puzzle has a hundred digits scattered in a square, and asks you to draw straight lines to create regions of equal sum–again, the search space is too large, and am I supposed to draw the lines directly onto the card??

The puzzle enthusiast’s case against IQ

I have no idea what led to the creation of this crummy product of the 90s, but I’m going to speculate and talk shit about IQ.

IQ is usually measured with Raven Matrices, which are a sort of symbolic pattern-matching puzzle. But Raven Matrices are not good puzzles, nor are they intended to be! They’re intended to measure something. A good puzzle isn’t there just to divide people into those who can solve it and those who can’t, a good puzzle actually provides a positive experience to those who attempt to solve it. Leave it to the organization founded on IQ to misunderstand the basic point of a puzzle.

There’s also an underlying contradiction here. IQ is supposedly an objective measure of innate intelligence, something that can’t be improved. But here a high-IQ society is selling products that help you “exercise”, with the implicit goal of improving or maintaining your IQ. As a puzzle enthusiast, I long suspected from a young age that IQ was a sham. Here I was, having spent a lot of time solving puzzles, so of course I would perform well on a puzzle-based test. It was never measuring something innate at all, it was measuring something that I had unintentionally specifically trained myself for.

General disclaimers: Perhaps the Mensa puzzle products from my youth were not a representative sample, or perhaps Mensa has gotten better at designing puzzles. I’m sure many Mensa members are good people, and that some are properly skeptical of IQ. But IQ is bad and I will always be suspicious of an organization based on it.