As a reminder, I’m open to requests to discuss any popular physics articles or videos, to append to my “I read popular physics” series. This video was not requested, but was shared by a friend of a friend a while back, and I have things to say about it.

In the Facebook thread where I first saw the video shared, many people were incredulous. As for myself, I immediately understood the argument from the title, and immediately agreed that it was correct. However, I feel the video is misleading, as it does not explain why there is a theoretical convention that the speed of light is constant. And by doing so, I feel it misses the point of relativity theory.

Special Relativity is a theory proposed by Einstein in 1905, and frequently taught to physics undergraduates in their first or second year. The purpose of Special Relativity is to explain the results of the Michelson-Morley experiment in 1887, which measured the speed of light in different directions. Technically, it did not directly measure the speed of light, but instead measured the time it takes for light to travel in one direction and back again. Thus, the experiment couldn’t really separate the eastward and westward speeds of light. It could, however, measure the difference between the east/west speed and the north/south speed. And the difference appeared to be zero. 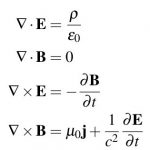 You can even derive the speed of light from these equations.

Special Relativity brings our attention to transformations that affect both position and time.

(a, b, c, and d are arbitrary constants)

Special Relativity established Lorentz transformations as the default transformation between reference frames in physics. It is also the most natural transformation, insofar as we would like to be able to just write down Maxwell’s equations–used not just to predict the speed of light but also the behavior of ordinary electronics–without taking into consideration the latitude, time of day, and time of year.  This is, however, just a convention. You could perform some non-Lorentz transformation, resulting in an unconventional set of spacetime coordinates where light travels at different speeds in different directions. This would make Maxwell’s equations a lot more complicated, and sort of defeat the point of relativity theory. But you could do it! Veritasium is technically correct.

In fact, there’s another convention that Veritasium seems to have completely taken for granted. That is, conventionally “t” represents time as it is subjectively experienced by a motionless observer. But we could choose a transformation that stretches or shrinks time. We could even reverse time, or swap time and space. You could make the speed of light faster or slower in all directions. But, normally we don’t do that, because it would be kind of a silly exercise. What I’m saying, is that Veritasium’s video feels like a similarly silly exercise.

But I will say one thing. If you ever want to study General Relativity, you may want to get used to general coordinate transformations. General Relativity describes the behavior of gravity using curved space-time. It’s a much more advance topic, typically being taught to PhD students rather than undergraduates. I actually never studied General Relativity! One of these days I’ll go through Carroll’s Spacetime and Geometry, but it’s hard to find the time.