I’ve complained before about music theory, and how it fails to actually address any of the music I actually like. One kind of music I have in mind is drone music. Consider, for instance, this reddit thread on the music theory of SUNN O)))

Honestly most drone is fifths and minor scales, it’s not really complicated.

The attitude being expressed is that drone music is too simple to require any music theory. This is a failure to engage with the music on its own terms. If that’s all there is, then what, pray tell, distinguishes different songs and artists? Are they just all interchangeable?

While it may be the case that drone music is particularly simple, I feel that this only makes the lack of a music theory all the more frustrating. Most music theory is frankly too complicated for me to understand, and it would actually be nice to have some simple music theory for once, if only music theorists didn’t think it was beneath them. In any case, I think the theory behind drone music is likely more complicated than they are making it out to be. Drone is highly preoccupied with texture (aka timbre)–a subject so difficult that music theory as a field has basically given up on it.

Anyway, in the spirit of being the change I want to see, I analyzed the spectrograms of a couple SUNN O))) songs.

But before I get to SUNN O))), I feel like I should maybe establish what a spectrogram is, especially for people who have never seen one. Here’s a spectrogram of a pop song. 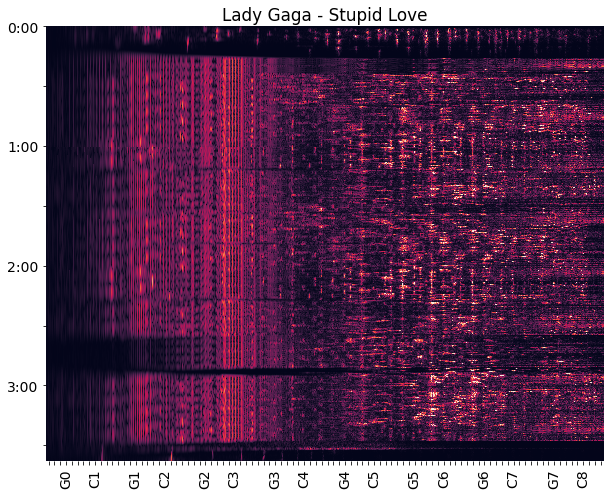 Lady Gaga – Stupid Love. No mockery is implied in this choice, Lady Gaga is fine.  I made these spectrograms in Python, but if you look around the internet there are easier ways to produce spectrograms, accessible to anyone.

The vertical axis shows time, the horizontal axis shows frequency. Brighter colors represent larger volume.  The frequencies are labeled with letters and numbers, where the letter represents the note and the number represents the octave.  So C2 is one octave above C1, C3 is one octave above C2, and so on.  The frequency tick marks represent all notes in standard tuning, so the first tick after C is C#/Db, the second tick is D, the third tick is D#/Eb, and so on.

The first thing that might jump out about the spectrogram, are the vertical bars in the G1 to C3 range. I believe this represents the song’s thumping bass. You might also notice a gap in the bass around 2:30 to 3:00–this is the song’s bridge.

Of course, when you actually listen to the song, what stands out the most is the singer’s voice. I think the voice is somewhere in the C6 region, but I can’t really distinguish it in the spectrogram. There are just so many other things going on in this song (typical in popular music), and it doesn’t help that we’re basically cramming three and a half minutes of information into small image.

You should have two takeaways from this image: Spectrographic analysis is limited in what it can do. And what stands out in the spectrogram is not necessarily the same as what stands out when you listen to the music. 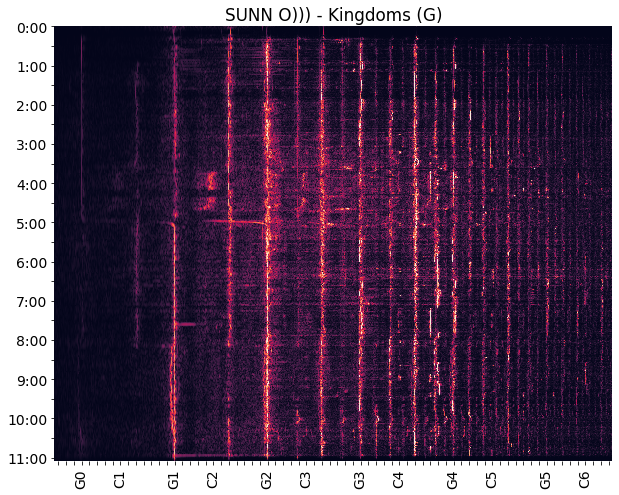 The difference is stark. Despite 11 minutes of information being crammed into a small space, the texture is so lucid that you can tell exactly what notes are being played. And at first glance, it’s basically the same notes for the entire song.

I know people joke about drone music being all about sustaining one giant chord for ten minutes straight, but this is not literally true for most drone music, or even most SUNN O))) music. It is, however, the literally true of Kingdoms (G) (as well as the other tracks in the same album). This makes Kingdoms (G) a good subject for study, and unusually amenable to spectrographic analysis.

Since it’s mostly just one chord, what is that chord? As the title suggests, it is a G chord. Each vertical bar represents one of the harmonics of G—that is, all the integer multiples of the G frequency. The fundamental note is the faint vertical bar at G0. The first bright bar is G1, which is twice the frequency of G0. And then D2, which is three times the frequency. G2 is four times the frequency and so on. At higher frequencies, the bars get closer and closer together, because the plot is on a log scale.

Harmonics, by the way, are not unusual. Almost everything we think of as a single note actually contains many harmonics, and those harmonics contain the information that allow us to identify the instrument. What’s unusual here is that the harmonics are so discernible, even up to very large numbers.

One thing about harmonics, is that they do not line up with the standard tuning system. For example, the fifth harmonic is close to B3, but is slightly flatter, by about 13 cents (ie it’s 13% of the way from B to B flat). And by the way, I checked the precise frequency of this note, and I found that it is about 13 cents flat. You could point to the B3 and say this is a G major chord, but I think it’s better to just describe it as G plus all its harmonics.  (Guitarists would call it a G power chord.)

When I listen to the song, what stands out from moment to moment are the high notes played on top of the G chord. Most of these high notes are simply strengthening some of the harmonics of G. For example, around 3:00 to 3:30, I hear (and see in the spectrogram) a bit of the 21st harmonic, which is otherwise very quiet. The 21st harmonic lies at C5 (perfect 4th), but is 30 cents flat. That’s right, SUNN O))) is microtonal!

There are also many notes that don’t line up with the harmonics, which provide a source of dissonance and tension. For instance, there’s a noticeable streak near C2 (perfect 4th) at the 4:00 mark Also at the same time there’s a note at E4 (major 6th). Together these imply a second-inversion IV major chord. Does this mean that it’s not actually one single chord played for the entire ten minutes? Perhaps.

There are many other things I could point out in the spectrogram, but let’s take a look at another SUNN O))) song. 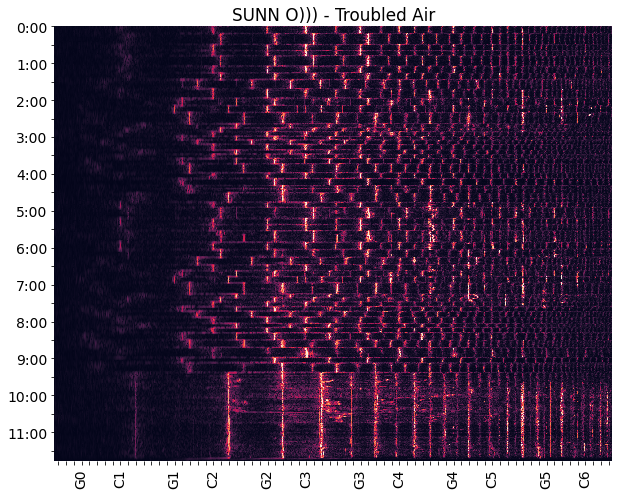 Troubled Air is a more typical SUNN O))) song, in that it has lots of chord changes. Well, it changes chords 4-8 times a minute. As explained in an Adam Neely video, the slowest beat that humans can experience as “rhythm” is about 33 beats per minute. This song is slower than that, so we could say that it basically doesn’t have any rhythm as far as the listener is concerned.

I’m not going to analyze all that, although I observe that it’s all in the Phrygian mode of C, with the notable exception of the A chords and the final D chord.

When I listen to the music, one thing that particularly stands out within the first 20 seconds is the E5, which sustains through the C to Db chord transition. This is the 20th harmonic of C, and the 19th harmonic of Db. In the C chord, it is a major third, and in the Db chord it is a minor third, allowing us to interpret these chords as C major and Db minor.

There’s a lot more to say about these two songs, about SUNN O)))’s larger body of work, as well as the work of other drone artists. But I think this analysis suffices to show that there are things to understand and talk about in drone music, despite its simplicity. Understanding the theory of drone is not a requirement to either produce or appreciate the music–obviously not since at this point nobody understands the theory of drone.  But I feel that a bit of theoretical discussion couldn’t hurt.