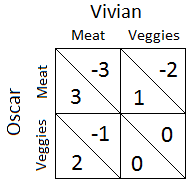 Structurally, this game is identical to the prisoner’s dilemma.  Vivian prefers to eat veggies, because eating meat is a net harm.  Oscar prefers to eat meat because he likes meat.  And yet, if each person acted upon their preferences, we’d get the outcomes in the upper right corner (1 util from Oscar’s perspective, -2 utils from Vivian’s).  From both people’s perspectives, this is worse than the outcome in the lower left corner (2 utils from Oscar’s perspective, -1 util from Vivian’s).

This is interesting, since the typical statement of the prisoner’s dilemma assumes selfish preferences.  Usually we have two prisoners, each of which wants to reduce their own jail time, and does not care one iota about the other prisoner.  But in the vegan/omnivore dilemma, both people are acting upon a measure of total good.

One possible resolution to the prisoner’s dilemma is for both prisoners to start to think about the other prisoner, and exercise a bit of altruism.  However, in the vegan/omnivore dilemma, each player believes they are already being altruistic, and that the other person is simply incorrect about their assessment of what is good.  Must each person exercise “meta-altruism”, and help the other person fulfill their misguided ideals?

I’m inclined to think this might be a case where “defecting” is the morally correct choice (i.e. Oscar should eat meat, Vivian should eat veggies).

Although the typical prisoner’s dilemma can be resolved by introducing altruistic preferences, the vegan/omnivore dilemma can be resolved by introducing selfish preferences.  Suppose each person selfishly prefers having money, and doesn’t care how much money the other person has.  Then each player could “buy” the other player’s cooperation.  If the prices are right, there doesn’t need to be any actual exchange of money.  This is basically the situation described by Jeff Kaufman.  However, for a number of practical reasons this resolution isn’t very satisfactory.

Postscript: Since originally writing this post, I became partially vegetarian.  And one of the reasons I still eat meat is because my partner does, and we’d prefer to share meals rather than preparing separate ones.  So sometimes I eat meat and sometimes he eats vegetarian.  It’s sort of like the situation between Vivian and Oscar, although I suppose it’s more like Battle of the Sexes.  Battle of the Sexes is a game where a man prefers to go to a boxing match, his husband prefers to go to the opera, but above all they both prefer to go somewhere together.