Every time I see people making disparaging remarks about “identity politics”, I wonder what that means. It sounds like a meaningless buzzterm, like “political correctness”. It sounds like an attack on any minority groups that dare to politically advocate for themselves.

But where did the term originate? How did it become popular? Which minority groups is it directed at? Has its use changed over time? Here I perform an empirical investigation using Google. 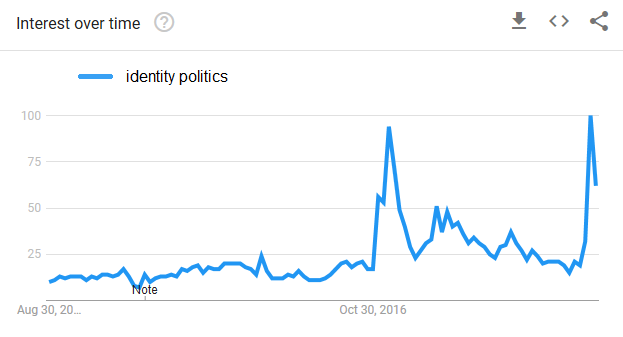 Source: Google trends. This tracks the popularity of search terms over time.

As can be seen from above, the term “identity politics” has been around for a long time. I looked as far back as Google trends allows (back to 2004), and it’s still there. However, there was a big spike in popularity in November 2016–the month that Trump was elected. There’s also a broad hump around January-February 2017, and a more recent spike in August 2017. I will investigate each of these time periods by sampling from time-constrained google searches.

Pre-election use
Prior to Trump’s election, “identity politics” did see plenty of use. Some examples:

In summary, “identity politics” mostly referred to race, but sometimes to gender and other axes of identity. It was mostly used by critics, and seems to be tangled up in white defensiveness about being called privileged. It’s also used by liberals to critique the Democrats. This last use would become more prominent after Trump’s election.

Trump’s election
Following Trump’s election, there was a big increase in searches for “identity politics”. Here are some articles that temporally correspond to the biggest spikes during that time:

There are bunch more articles along these lines, including some backlash articles defending identity politics. So at this point in time, “identity politics” is a way for people (mostly liberals) to criticize the way Democrats relied too much on race, gender, and other stuff.

Early 2017
There’s a broad hump in popularity around January and February 2017. Though I could not identify any clear cause, here is a small sample:

What’s happening here is that writers are further developing the concept of identity politics. Many people are questioning the framing, or trying to redefine what it means. There’s also more adoption of the concept among conservatives.

Charlottesville
There was another increase of search interest this August. At a glance, you can tell that the cause was the Unite the Right rally at Charlottesville–you know, the one with all the Nazis. The two biggest spikes were on the 17th and 20th of August, which don’t obviously correspond to any particular events or articles. Nonetheless, here are a few notable articles:

So now the conversation is transformed by the obvious fact that white people have their own identity politics. But different people seem to have different responses to that.

Conclusion
“Identity politics” has had a storied history in the last year. It refers to a grab bag of issues related to minority groups, but it’s predominantly a euphemism for race. It started out as a disparate collection of discussions about racial politics, but coalesced into a critique of the Democratic party. From that point, there were many critiques of the very concept of identity politics. It was also adopted by some conservatives looking for a way to attack liberals. More recently, in the wake of Nazi demonstrations, identity politics has become a tool for the left and right to blame Nazis on each other.