Recently, there was a protest at UC Berkeley, which led the loathsome Breitbart journalist Milo Yiannopoulos to cancel his talk. Some of you may have figured out by now, this is a local story to me. I saw the protest myself.

Well, I only really walked by the protest on my way home. There were maybe a hundred people at 5 pm, but UC Berkeley says it later grew to 1,500. Protestors were chanting “No Milo! No Trump!” There was someone holding a giant dove. I took a flyer, which was produced by refusefascism.org–and then being anti-social I went home and played video games. 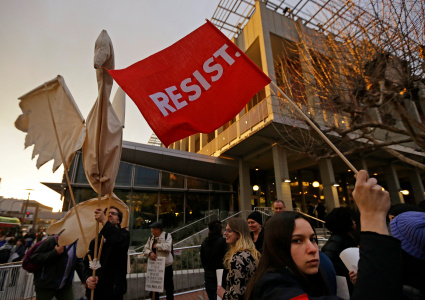 Somebody managed to capture the dove. This photo is on the edge of the crowd so it doesn’t tell you how big it was. From Chicago Suntimes, who credits it to Ben Margot/Associated Press.

It was later I heard from Facebook that the protest had turned violent, and the university cancelled the talk. I heard that protestors attacked police, set a portable generator on fire, and then broke a bunch of windows nearby.  There were few minor injuries.

Among my friends, many expressed sympathy for the protest, or were at the protest, but they condemned the violence. They were keen to highlight this particular part of the UC Berkeley statement:

The violence was instigated by a group of about 150 masked agitators who came onto campus and interrupted an otherwise non-violent protest.

They’re called “the black bloc”, but that’s just a generic term for people who do violent protest in masks. My impression is that people who are far away just ignore the black bloc dimension, perhaps assuming that violence is a natural outgrowth of the protest when feelings get particularly high. But to locals and participants, the distinction between the black bloc and peaceful protestors tends to be pretty important. Among other things, peaceful protestors are concerned about their personal safety, and don’t necessarily appreciate another group dominating the message of their protest.

I will say something in favor of violence before expressing ambivalence. Milo is known for harassing quite a number of people, both in general, and specifically at these talks. For instance, there was an incident where he outed and mocked a trans student. As far as would-be victims of harassment are concerned, I’m sure they’re glad that Milo’s talk got cancelled. That’s definitely worth breaking a few windows/laws! As far as Milo’s free speech goes, isn’t he a friggin’ journalist? Didn’t the chair of his rag go on to be the president’s Chief Strategist? The reason I don’t listen to Milo is that he’s a vacuous piece of shit, not because I am unable to google him.

If you want to defend some sort of free speech principle, talking about Milo is a shitty argument, and I don’t know why anyone bothers. “What’s the benefit of free speech?” “We get to listen to Milo Yiannopoulos!” “No I said ‘benefit’, not ‘bullshit’.”

Obviously free speech needs to be defended on some sort of procedural grounds. If we have procedures which make it easy to no-platform speakers, it would likely lead to no-platforming speakers that we like. If no-platforming is done on the basis of large protest, then that causes a chilling effect on minority speakers, which would seem to pertain to many social justice advocates and atheists. If no-platforming is done on the basis of some ideological principles (such as no hate speech), it’s likely that those ideological principles would be chosen and judged by people in power. Is no-platforming really a way to upset the balance of power? It seems more like a way for people who already have power to make use of it.

Which isn’t always a bad thing. For instance, at the moment Trump thinks he has all the power, but he doesn’t because power belongs to the people, and he is wildly unpopular. I look forward to the time when we express our power by ousting Trump. I’m not sure violence is an necessary part of that process but what do I know.

There’s also something to be said about reciprocity, or the lack thereof. If we do everything to respect the procedure, that doesn’t mean our opponents will do the same for us. For instance, it doesn’t really matter how much Obama “overreached” in his presidential power, because Trump would be doing what he’s doing regardless. I think we are trapped in this loop of hypocrisy, where we shut down opponents, and they cry “procedure!” And then opponents shut down us, and we cry “procedure!” And we take turns pointing out each other’s hypocrisy. Well, maybe if the procedures are so great, they should be enforced by coercion, and not merely by high-minded principles and complaints. Otherwise following procedure is just a way of shooting yourself in the foot and hoping your opponent follows suit, despite past experience.

This leads to some strange moral possibilities.  Perhaps violence is right, because your opponents would do the same.  And perhaps at the same time, laws against violence should be strictly enforced.

Okay, but let’s suppose that there is no expectation of reciprocity.  Whether “our” side commits violence has no influence on whether our opponents do the same.  Is violence now worthwhile?

It’s very hard to judge the effectiveness of any kind of activism, and I’m not surprised that some people think violence is effective. But I would voice my baseless opinion that perhaps it isn’t. Among people I know, it seems to have served not as a galvanizing force against Trump, but a distraction. Peaceful protestors have to take a moment to condemn violence.  Libertarians crow more about censorious liberals.  Analytic people like myself waste time arguing philosophy.  And maybe all of us responding in negative ways should be dismissed because we are terrible people.  But this dismissal of reality just seems like a good way to deny honest evaluation of one’s activism.

I propose, for consideration, a model where violence is not just a way to make use of power, but a way to spend power. Black blocs spent a little power to prevent Milo from speaking. I think it wasn’t worth it.