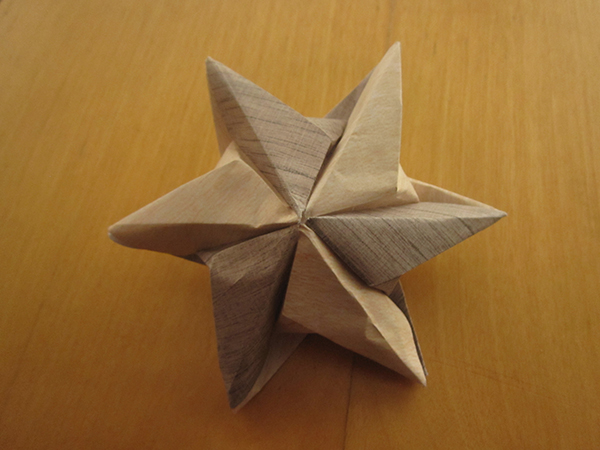 Square Star, by Ekaterina Lukasheva.  The squares are on the side, not visible in this photo.  Ekaterina has her own fancier photos here.

I was, however, pleased to see some modular origami representation, and in particular there was Ekaterina Lukasheva, of Kusudame.me.  She gave a presentation on the connection between modular origami and origami tessellations.  And afterwards, as a demonstration of principle, she showed people how to make the Square Star, shown above.

I think perhaps few people understood her talk, but as someone who is interested in the design of both modular origami and origami tessellations, I for one found it inspiring.  Further discussion and origami below the fold.

An origami tessellation is a repeated folding pattern, which could in principle be tiled infinitely in the plane.  For example, see the tessellation below. 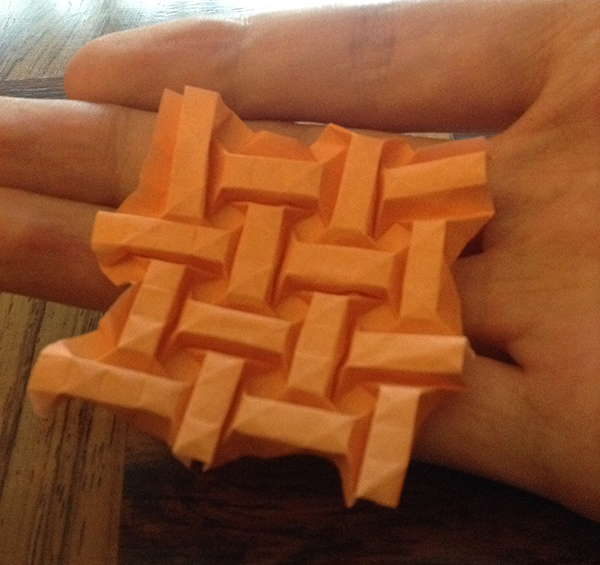 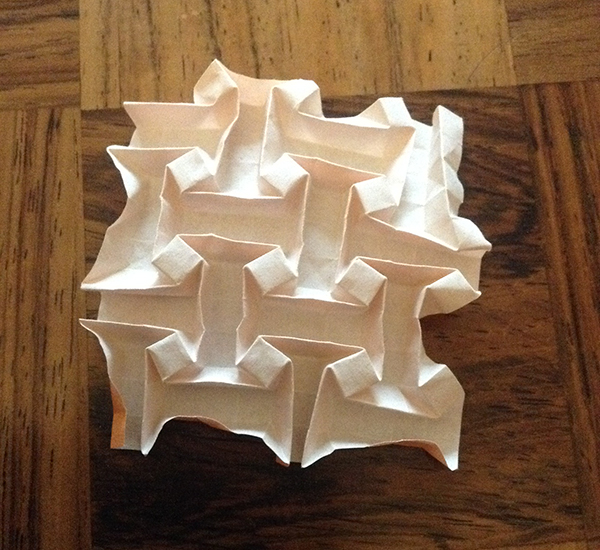 The back of the Rectangular Woven Design.

Each repeated unit of the tessellation is called a “molecule” (although as a physicist I like to think of them as unit cells).  In the example above, the molecules appear in a square lattice, with each molecule being adjacent to four others.  It is also common to make molecules in a triangular lattice, where each molecule is adjacent to six others.

While tessellations are usually folded from single sheets of paper, it is quite easy to imagine folding each molecule from a separate sheet, and attaching them together.  And if you’re attaching four pieces of paper together into a square, why not three pieces of paper, or five?  The answer is, if you did that, it would no longer be flat.  Rather than tiling the plane, the pieces of paper would fold around into a polyhedron.  And now, instead of a tessellation, you have a modular origami piece.

The Square Star, although you might not be able to tell, is an example of such a model, apparently based on Ekaterina’s Squares-1-C-Iso tessellation.  The Hydrangea Cube I posted last month is another example.  Truly this is a unique approach to modular origami design.

There is a problem with this idea: It’s not clear to me how anyone but a master could pull it off!  I believe that to make a more interesting modular origami model, you would have to start with a tessellation with a more 3-dimensional structure.  And currently, there are basically no instructions on how to do this!

Origami Tessellations are really new, and hardly any information about them is available.  There are presently two books I know of, Origami Tessellations by Eric Gjerde, and Six Simple Twists by Benjamin DiLeonardo-Parker.  And apparently Robert Lang is publishing a third book next year.  Origami Tessellations is a landmark, but most of its designs are based on pleating and are flat.  I am not sure about Six Simple Twists, but the subtitle mentions “the pleat pattern approach”, also suggesting a focus on flat patterns.  Contrast with the Rectangular Woven Design shown above, which has more of a three-dimensional structure.

The best I could find on three-dimensional tessellations was a paper which reconstructed decades-old tessellations by David Huffman, including the Rectangular Woven Design above.  I was able to recreate it with some difficulty, although maybe that’s because I was using really tiny paper.

A glance at Ekaterina’s website suggests that she has been doing quite a number of tessellations, which IMHO are more impressive than anything I’ve seen by Huffman.  I hope one day she will publish!

Bell’s Theorem explained » « What is meaning?