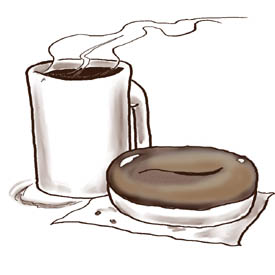 *Material is a vague term for “stuff”. Later I’ll discuss a few different materials including magnets, liquid crystals, and superconductors 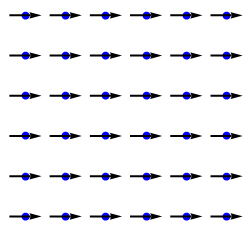 (All images in this post, unless otherwise credited, are my one. Use only with attribution.)

Of course, none of the atoms knows which direction is the “right” direction. Rather, each atom interacts with its nearby neighbors. It’s energetically favorable for nearby atoms to align with each other. But if its neighboring atoms happen to be in the “wrong” direction (perhaps because of random motion, or impurities), there’s no way for the atom to know.

Suppose that the atoms were instead in a configuration like one of these:

Both of these configurations are “smooth”, meaning that each atom is pointing in nearly the same direction as its neighbors. However, there seems to be a single discontinuity at the center of each configuration. This is a topological defect. Specifically, this is called a point defect, because it exists at one point. It is not possible to remove the point defect without temporarily sacrificing the overall smoothness. Therefore, even though the topological defects are not the lowest-energy states, they are still somewhat stable. 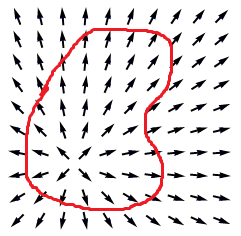 There’s no way to smoothly deform the arrows so they don’t go around in a circle. To steal an analogy from my professor, it’s like I tied a string in a loop around my finger. I can’t very well take the string off, because my finger is in the way (ignoring the possibility of slipping it off the end of my finger).

In fact, there will be two kinds of point defects. One defect corresponds to going around the circle clockwise. The other corresponds to going around the circle counter-clockwise. (I showed one of each kind in an image above.) As it happens, if these two point defects meet, they cancel each other out. The defects behave a bit like particles and antiparticles, annihilating when they encounter each other.

Now let’s consider the case where the magnetic field of each atom may point in any direction in three dimensions. In this case, the order parameter manifold is not a circle, but a sphere (specifically, the surface of the sphere). That makes a big difference, because if you draw a loop around the sphere, now it is possible to continuously deform the path into a single point. (In mathematical terms, every loop is “homotopic” to a point.) This means that there is no point defect (in 2D).

On the other hand, if you had an order parameter manifold which was shaped like a donut, then there would be some loops which you could not shrink down to a point. These loops would correspond to point defects.

Some order parameter manifolds may be even more complicated. For example, liquid crystals are made of long molecules. In the “nematic” phase of liquid crystals, the orientation of the molecules becomes an order parameter. But the order parameter manifold isn’t quite a sphere, because you only need to go around 180 degrees to get back where you started. Instead, it is an exotic topology called the real projective plane. The real projective plane looks like a sphere, except that opposite points of the sphere are identified as the same point. Here is a point defect in a 2D liquid crystal: 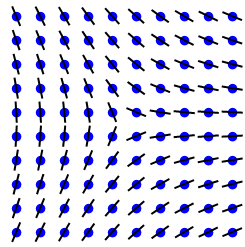 Even though I drew all the orientations to be in the plane, they are still free to move out of the plane. But still there is no way to smoothly get rid of the defect.

Other kinds of defects

All the above examples were point defects in 2D materials (though the order parameter manifold may have more dimensions). But there are other kinds of defects in higher-dimensions. For example, there is such a thing as a line defect, also called a vortex (the plural is “vortices”). 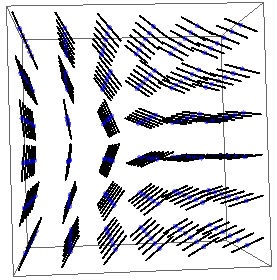 Whenever there would be a point defect in 2D, there will be a vortex in 3D. All it takes is a loop in the order parameter manifold that cannot be continuously deformed to a point.

On the other hand, if there is a bubble in the order parameter manifold that cannot be continuously deformed to a point, then we can have point defects in 3D. One example of such a defect is the “pincushion” pattern. 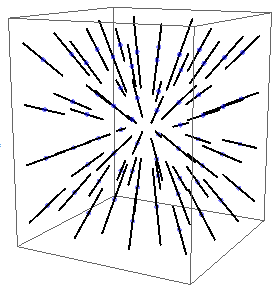 There’s also another class of defects which aren’t defects at all: topologically nontrivial field configurations. Basically, the order parameter is smooth everywhere, but there’s a funny pattern in the order parameter that cannot be removed. Here is an example in a 2D liquid crystal: 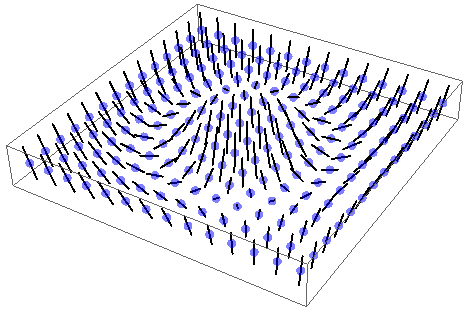 I admit, I think it’s just cool that topology appears in the real world, even if it’s not so useful. But at the same time, I’m sure it is useful. I study superconductors, which have topological defects of their own. The superconductor’s order parameter manifold is the same as my first example: a circle. (The order parameter, however, is not magnetic field direction, it’s the complex phase of the superconducting condensate’s wavefunction.) So that means that superconductors can have vortices.

If we want superconducting wires with high electric current, we need them to tolerate the magnetic fields produced by that current. The superconducting magnets in MRI machines, therefore, require type-II superconductors. Topological defects: saving lives!

Paper: Cutting ties leads to cooperation » « Re: Necessity of sex-positivity