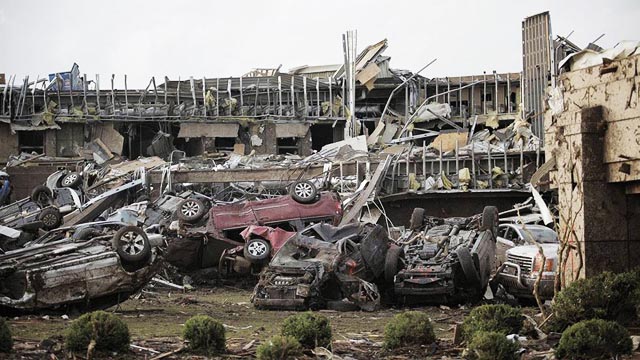 There’s been some confusing reporting on the rating of the tornadoes that devastated Moore, OK, yesterday. Earlier today some outlets reported it was an F4, this afternoon others reported an F5. I’ve dug around and can’t be certain, but what appears to be happening is various parts of the twister’s path are being analyzed and those findings help assigned a rating on the Fujita Scale for that portion of the ground track. In addition, the scale now used is the Enhanced Fujita Scale, which is why you see the EF designation popping up. The original F designation cuts off for an F5 at winds greater than 261 MPH, the EF scale cuts off at 200 MPH. The reason the older scale is considered obsolete has to do with how wind works. Momenta of wind or swirling debris moves with the square of the velocity, but a newer metric called energy dissipated is proportional to the cube.

It is likely some EF5 portions will come to light and that may be beginning already. When you see cars tossed like they are above, on top of a shredded steel-reinforced cinder-block storm-rated hospital, that’s usually gonna be as bad at it gets. If surface winds in a hurricane were to get as strong as they did yesterday in Moore, we would have to extend the Saffir-Simpson Hurricane Intensity Scale to at least Category Seven. Whether it crosses the 261 MPH threshold remains to be seen, but that is extremely rare and depends on precise measurements at the greatest max intensity which are almost impossible to gather directly without exposing very specialized equipment to the wall of the vortex. It’s also just academic at this point.