I hate to read reports like this one yesterday where tennis player Naomi Osaka was severely heckled during her match.

Naomi Osaka was reduced to tears after being heckled during her second-round defeat to Veronika Kudermetova in Indian Wells.

The Japanese player, who missed parts of the 2021 season to look after her mental health, was jeered early in the match and it was undoubtedly a major factor as she lost 6-0, 6-4 to the world No 24.

A spectator reportedly shouted “Naomi, you suck”, with Osaka complaining to the umpire, and as she went to serve at the start of the third game, she was visibly crying. Clearly affected, she lost the first set without winning a game, before putting up a better fight in the second.

This behavior was especially cruel since Osaka has had well-known issues with mental health that have caused her to withdraw from some major tournaments. But it appears that this particular tournament has a nasty reputation for obnoxious fan behavior.

Osaka made the unconventional decision to stay on court and be interviewed after her loss, saying the incident reminded her of a video she watched of Venus and Serena Williams receiving abuse at the same venue in 2001.

The Williams sisters boycotted the event – widely regarded to be the biggest outside the four grand slams – for 14 years after being racially abused 21 years ago. Speaking through tears on court, Osaka said: “I just wanted to say thank you, I feel like I cry enough on camera.

“To be honest, I’ve been heckled before, it doesn’t really bother me, but being heckled here, I watched a video of Venus and Serena getting heckled here. If you’ve never watched it you should watch it and I don’t know why, but it got into my head and it got replayed a lot.”

This kind of behavior is particularly reprehensible in individual sports. When a team gets heckled, the vitriol is spread around and if an individual team member is targeted, their team mates can rally round that provide support. But tennis players are on their own. Remember that in 2001, Serena Williams was only 19 and not yet the tennis powerhouse she later became.

I went to a school where the principal had very strict rules about how the boys should behave when they attended a sporting event in which our school team was playing. You were allowed to cheer but only spontaneously and positively to encourage better efforts. You were not allowed to engage in organized cheering where people would cheer in unison or in a call-and-response fashion, with or without a leader. You were expected to applaud good plays by the opposing team. And you were absolutely forbidden from jeering or heckling or booing the opponents. The idea was to get the best performances by members of either team.

The principal would attend most games and if there was any violation of these rules, especially the one about castigating opponents, we could expect a stern lecture at the next day’s school assembly and if any individual student was identified as a culprit, he would be called in to the principal’s office for a personal dressing down. If my principal had been an official at the Osaka event, he would have had security march that fan out of the stadium.

Such strict rules for spectators was unusual even among Sri Lankan schools. While some students chafed under them, I must say that it has had a lasting, and I believe positive, effect on me. I still follow those rules and think that they add to my pleasure of watching games because I can appreciate good play y anyone. After all, these events are designed to highlight superior athletic abilities, not to gloat or taunt. The famous closing lines of the poem Alumnus Football by sports writer Grantland Rice were drilled into us in school because it uses sports as a metaphor to teach the lesson that one should live one’s life in a principled way so that one can look back on it without feeling shame or remorse.

For when the One Great Scorer comes to mark against your name,
He writes – not that you won or lost – but how you played the Game.

I know that complaining about bad behavior by some sports fans in the US is like complaining that water is wet. But I still hate it and find it hard to understand. Don’t you go to these games to see players at the top of their game, whichever side they are on? Why would you want to suppress the quality by unsettling them? I can understand that one’s team sometimes wins because the opposing team played badly and that this can be a guilty pleasure. But the key thing about guilty pleasures is that they are kept secret. To openly taunt and vilify opponents in order get them to play badly is going too far because it cheapens your own team’s victory, making it due to factors other than superior ability. The only ‘rational’ reason I can think of for this kind of bad behavior is that there is gambling involved that makes the result more important than the quality of play. 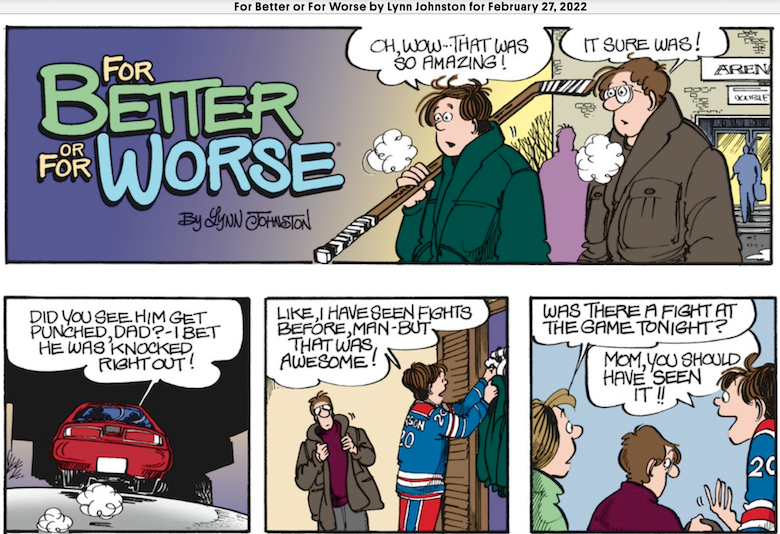 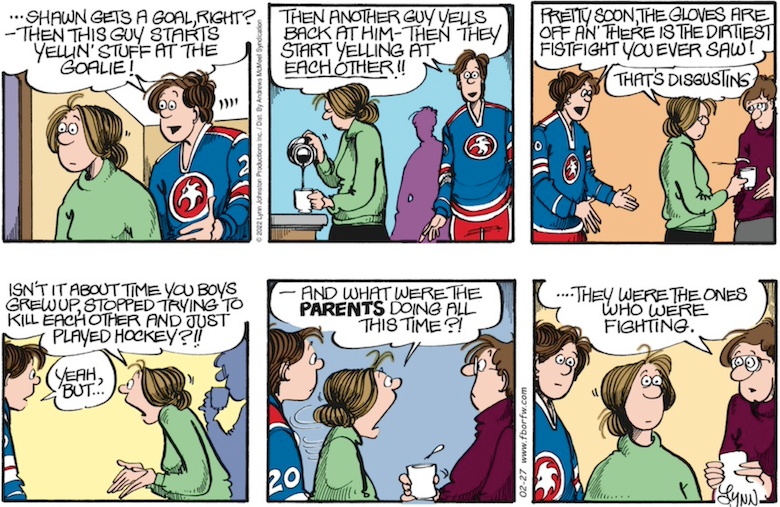 (For Better or Worse)

Seven Suggestions for Becoming a More Productive Writer by Mano Singham » « What’s with the fascination with designer clothes?