The fossilized remains of a large 10m long ichthyosaur, a sea predator, has been found in the mud of a dried out region of a reservoir in England. Here is an artist’s reconstruction of what it might have looked like. 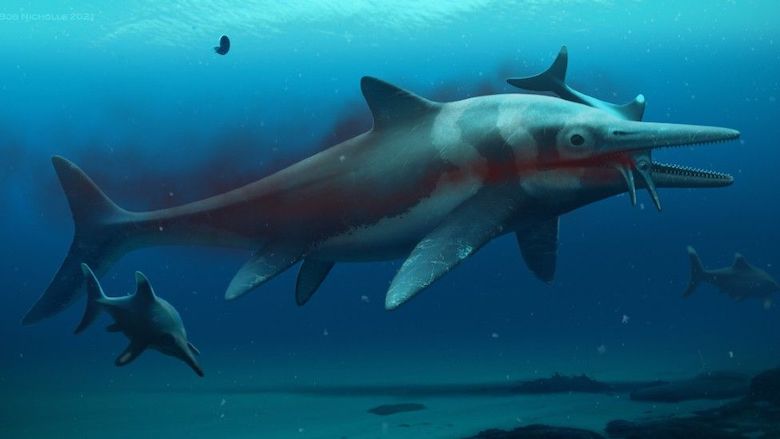 They concluded it was an ichthyosaur – a type of warm-blooded, air-breathing sea predator not unlike dolphins. They could grow up to 25 metres long and lived between 250 million and 90 million years ago.
…

“Usually we think of ichthyosaurs and other marine reptiles being discovered along the Jurassic coast in Dorset or the Yorkshire coast, where many of them are exposed by the erosion of the cliffs. Here at an inland location is very unusual.”

Rutland is more than thirty miles from the coast, but 200 million years ago higher sea levels meant it was covered by a shallow ocean.

To get a better sense of the size of this fossil, this photograph shows a person lying next to the outline of it. 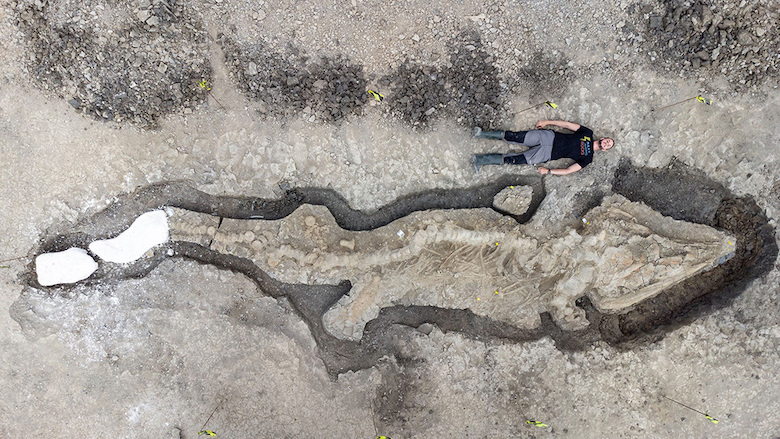 These creatures are believed to have gone extinct about 90 million years ago. But I expect believers in the Loch Ness Monster to point to this discovery as suggesting that it supports their belief that good old Nessie could exist.

In my book The Great Paradox of Science, I use the Loch Ness Monster as an example of how scientists can arrive at confident conclusions about the non-existence of something like Nessie even though they cannot prove it. But such reasoned arguments count for little to those willing to seize upon anything, however unrelated, to support their cause. In this case, the discovery of a fossil of a large animal in a reservoir will be seen as sufficient for them to claim that Nessie could exist and for true believers. it is a short step from believing something could exist to believing that it does exist.

Radiation paradoxes 12: Radiation from a falling charge and the conservation of energy » « Andrew stripped of royal titles and patronages