The label ‘right wing echo chamber’ is used frequently, including by me. But what are all the entities that make up this group, who is behind them, how are they related, and how do they operate? Matt Gertz in the April/May 2021 issue of The Progressive does the analysis. 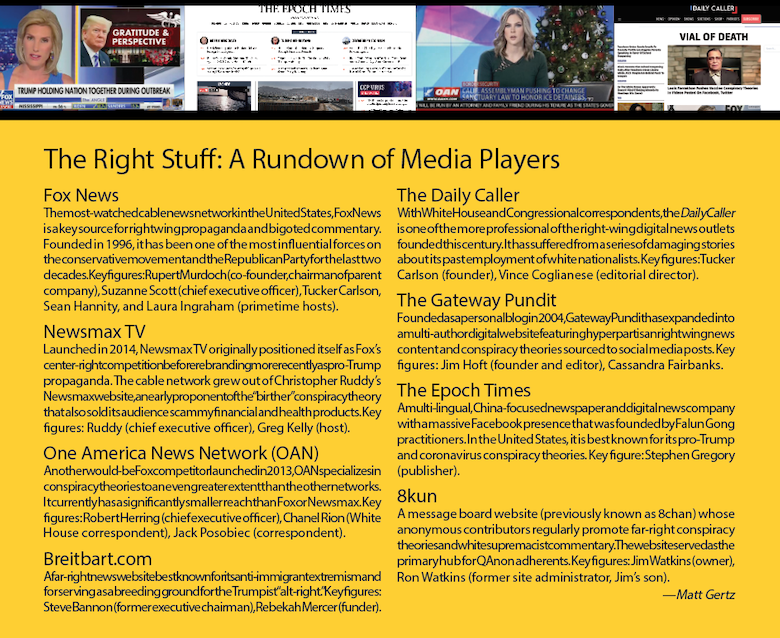 Fox News is historically the primary cog in this machine. Its roster of stars and millions of devoted fans allow it to choose which stories gain purchase within the rightwing information network. But rivals including Newsmax TV and One America News Network (OAN) have emerged in recent years, courting their audiences with programming even further to the right. And all three cable news networks are at the end of a vast information food chain, in which misinformation is shared on message boards and social media feeds, gets algorithmically accelerated by platforms like Facebook and YouTube, passes through conspiracy sites like Gateway Pundit and the Epoch Times, and is laundered and legitimized by outlets like Breitbart.com and The Daily Caller.

Gertz gives an example of how misinformation once produced, even by the most unreliable of sources, ricochets around the chamber, getting amplified with each repetition and thus eventually acquiring a veneer of legitimacy.

In one such case of how the rightwing disinformation food chain functioned, an anonymous poster on the pro-Trump subreddit on the message board Reddit, r/The_Donald, produced an “analysis” claiming that millions of Trump votes had been deleted by the voting machine company Dominion Voting Systems. That analysis was written up by the pro-Trump conspiracy theory website Gateway Pundit, then lifted by the Fox rival OAN. Trump, watching the OAN segment from the White House, credulously tweeted about it in real time, spurring further coverage from larger outlets like Fox News and Fox Business.

What aids this process is that there seems to be no price paid whatsoever for being grossly wrong or even flat-out lying.

In the rightwing media ecosystem, there has been no reckoning at all. The ongoing ratings war between Fox, Newsmax TV, and OAN made that impossible. With Trump firmly in control of the GOP base, none of the major drivers of the ecosystem dared to risk their own viewership by blaming him for the attack – or acknowledging their own culpability.

Instead, the most powerful voices in rightwing media have spent the weeks since the insurrection minimizing the event. They vehemently denied that the events had been an armed insurrection or an attempted coup, and demanded that the nation move on. The widely reported evidence of white nationalists, QAnon adherents, Proud Boys, and other extremists were lies, they claimed. Instead, the rioters were Trump supporters who had valid concerns that got out of control – or the violence was actually committed by antifascist activists.

Left to their own devices, the rivalry between rightwing outlets will continue to create a race to the bottom of the fever swamps, as the networks compete against each other to attract an audience with paranoid and unhinged claims about Biden and his administration. The downstream effect of their competition is increasingly insurrectionist content beamed to millions of Americans, spurring future violence.

That there seems to be no price to be paid for spreading false information is true even for supposedly mainstream media, as we saw with how outlets like the New York Times, Washington Post, BBC, NPR and a whole host of other so-called ‘respectable’ news sources spread false information that led up to the invasion of Iraq. In general, I view with deep skepticism the reporting of the mainstream media in their coverage of anything that involves the agenda of the bipartisan pro-war, pro-business consensus in US politics or deals with ‘official’ enemies of the US such as Russia, China, Cuba, North Korea, Venezuela, Iran, etc. or with unsavory governments that the US supports such as those in Israel, Saudi Arabia, and Egypt.