Hasan Minhaj has another excellent show about how private equity firms are destroying the newspaper industry the way they have destroy so many other companies, by borrowing money to buy troubled companies, saddling those companies with that debt, squeezing as much money as they can by cutting jobs and selling assets and paying themselves huge fees, and then walking away leaving the companies to die.

Ah, the glorious working of capitalism!

One of the encouraging signs about the recent demonstrations against police brutality and systemic racism is that they have not been confined just to the big cities but have also extended to small towns across the country. However, it was only a matter of time before there was a backlash against this and we saw one such incident in Bethel, Ohio when a woman in that town decided to organize a rally to show solidarity with the demonstrations that were taking place in cities across the country.
END_OF_DOCUMENT_TOKEN_TO_BE_REPLACED

On the surface, the ruling by the US Supreme Court in the case of JUNE MEDICAL SERVICES L. L. C. ET AL. v. RUSSO to strike down Louisiana’s law that made access to abortion very difficult was a big win for abortion rights. But a closer examination reveals that it may have just set up the next legal challenge.

To understand the ruling, we must note that the Louisiana law under scrutiny was just the latest in a long line of so-called ‘trap’ (targeted regulation of abortion providers) that anti-abortion legislators pass that try to circumvent the right to abortion not by banning them but by imposing regulations on providers that are highly burdensome and unnecessary under the guise of protecting the health of the women seeking abortions. The aim of these laws is to shut down as many abortion clinics as they can because they cannot meet the requirements. This would primarily affect poor people since rich people will be able travel long distances or out of state or even out of the country to get abortions.
END_OF_DOCUMENT_TOKEN_TO_BE_REPLACED

The recent protests and demonstration have largely featured young people of diverse backgrounds facing off against the police or Trump-supporting counter protestors. But Saturday saw something different at The Villages, a retirement community in Florida that has very wealthy, almost exclusively white, residents. It is seen as a reliably very right-wing Republican stronghold and has hosted many fundraisers for such candidates including Trump.
END_OF_DOCUMENT_TOKEN_TO_BE_REPLACED

NPR had this interesting story.

Last week, softball was in the spotlight, and not because anybody broke ranks and knelt but because the general manager of the Scrap Yard Dawgs, an independent professional softball team, tweeted a picture of the players standing at President Trump from the organization’s official Twitter account. The last portion of the tweet under the picture read, quote, “everyone respecting the FLAG!” with flag in all caps and an exclamation mark.

END_OF_DOCUMENT_TOKEN_TO_BE_REPLACED

If you want to know how bloated US police departments are and how militarized they have become and how blatantly they disregard civil liberties, the NYPD is the place to look. This article by Tana Ganeva and Laura Gottesdiener from back in 2012 lists the “nine frightening things about America’s biggest police force.”

The NYPD is the biggest police force in the country, with over 34,000 uniformed officers patrolling New York’s streets, and 51,000 employees overall — more than the FBI. It has a proposed budget of $4.6 billion for 2013, a figure that represents almost 15 percent of the entire city’s budget.
…

What has the NYPD been doing with all that cash and manpower? In addition to ticketing minorities for standing outside of their homes, spying on Muslims who live in New Jersey, abusing protesters, and gunning down black teens over weed, the NYPD has expanded into a massive global anti-terror operation with surveillance and military capabilities unparalleled in the history of US law enforcement.

In an email published by WikiLeaks, an FBI official joked about how shocked Americans would be if they knew how egregiously the NYPD is stomping all over their civil liberties. But what we already know is bad enough. Here’s a round-up of what the department has been up to lately.
END_OF_DOCUMENT_TOKEN_TO_BE_REPLACED

Is there anything more boring than seeing the vacation photos of other people? What makes it worse is that the people who show you these photos are usually people you know well, making it hard to politely extricate yourself from the situation, as neighbor Bob realizes. 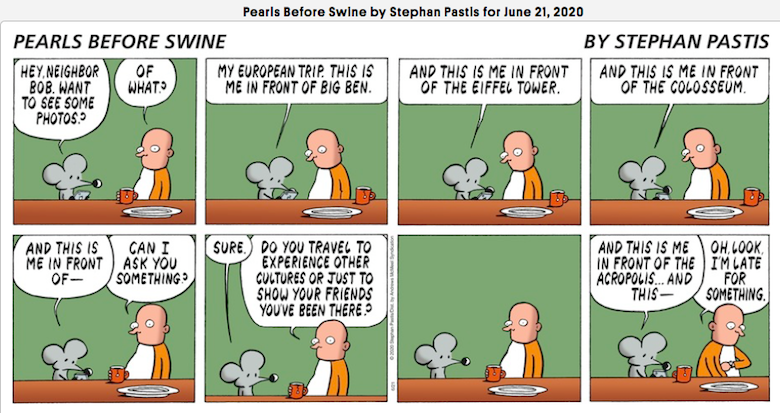 One of Trump’s most loyal groups of supporters are Christian evangelicals who, in their single-minded devotion to opposing abortion and LGBT equality, are willing to overlook the fact that Trump violates pretty much every tenet of what Christianity professes in return for him appointing conservative judges whom they think will rule in their favor them in the culture wars. But even here cracks are beginning to show as more of them are expressing support for Joe Biden.
END_OF_DOCUMENT_TOKEN_TO_BE_REPLACED

So how did they do? Pretty well, it turns out.

One big win was that Jamaal Bowman defeated Eliot Engel in the Bronx congressional district in New York City. Engel has been in Congress since 1989, was high in the party leadership, and the party establishment pulled out all the stops to try and help him retain his seat, seeing this as another major threat to its control, the way that Alexandria Ocasio-Cortez upset another senior party leader Joe Crowley in 2018. But it was to no avail.

Incidentally, Engel is one of the most loyal members of the Israel lobby, a position increasingly unpopular in the Democratic party as its membership increasingly recognizes that Israel’s treatment of the Palestinians in unjust.
END_OF_DOCUMENT_TOKEN_TO_BE_REPLACED

This clip from John Oliver’s show was from back in 2017 but is still timely in the current context of removing statues and other monuments honoring confederate leaders and renaming military bases named after confederate generals.